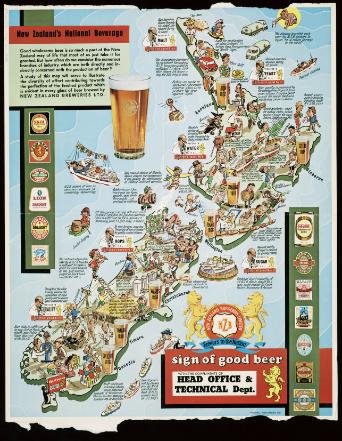 This is not a definitive bucket list, more my cut-and-paste for the next time someone asks me about my favourite beer. The answer often depends on where I am…

1. Try a barrel-aged beer from 8 Wired: Out now and tasting divine is Fistful of Cherries.

2-4. When travelling in the Tasman region pop into Toad Hall in Motueka and sup some Townshend’s –  the Aotearoa NZ Pale Ale is tasting fine; grape, grass and diesel gas but clean as a whistle. Carry on to Hop Federation in nearby Riwaka for a Red IPA. And then the Mussel Inn in Golden Bay for a Captain Cooker in the garden bar.

5. A visitor to Hawke’s Bay? The Brave Brewing tap room in Hastings is a must: go for the Tiger Milk IPA.

6. Parrotdog is the most reliably good brewery right now. As a go-to six-pack, I can’t go past their Falcon APA. Check out their retro-cool bar in Lyall Bay too.

7. When in Christchurch, get to Lincoln to visit The Laboratory for real cask ale. It’s an amazing spot with an ever-changing tap line-up.

8. Try a gose – the salt and coriander beer from east Germany. North End’s Become the Ocean is a good starting place.

9. If you’re travelling north from Auckland, divert your trip to check out Sawmill Brewery and Smoko Room in Matakana. The Pilsner is primo.

10. Going west, young man? Hallertau for a tasting tray and then Liberty in Helensville for a C!tra in the new taproom.

11. Emerson’s in Dunedin is the real deal. The food is stunning and the 1812 Pale Ale is tasting its best in 25 years.

12. If you’re not lactose intolerant, try a milkshake IPA – Weezledog has a new one coming while Duncan’s Whippy IPA is a smooth, fruity gem.

13. Have a lager this summer and remember what beer used to taste like – McLeod’s Longboarder is even better if it’s at McLeod’s Pizza Barn in Waipu.

14. In the far north, Kainui brewery is a must-visit. It’s a brewery inside a vineyard with a wide range of well-crafted beer but the Rank & File American Porter was one of the beer revelations of the year.

15. Have a Garage Project fresh IPA – they are “date-stamping” cans of IPA with the month in which it’s brewed. Look out for NOV up next.

16. Get a Behemoth Lid Ripper, rip off the lid and drink it from the can.

17. Have a pint of Bob Hudson Bitter at Galbraith’s; real ale, real taste.

18. Go to Wellington and live the craft beer life – there are too many places to list, but the range Fork & Brewer is a one-man band of brilliance from brewer Kelly Ryan. Alpha Geek is one of the best IPAs of 2018.

19. Try something exotic from Craftwork – such as Bruxelles Ma Belle, a Belgian-style stout blended with a wild fermented ale and aged on apricots.

20. Drink beer from where you are, not where you’d rather be… The brewing quality around New Zealand is stunning and you can invariably find something you’ll like.