After last year’s successful bus day trip to Central Otago, the interest level in an extended, overnight version further on to the Southern Lakes grew and grew. Were we mad to think we could hire a bus and entice a fifth of the entire SOBA Otago membership to fill it?

The bus driver from last year enjoyed himself so much he wanted to do it again and this time bring his wife. Everybody thought there’d be no problem filling the bus: there was a Beer and BBQ Festival at Coronet Peak skifield and some of us felt a patriotic duty to make fill the tourist void in Queenstown and Wanaka, the former especially suffering a downturn due to lack of overseas visitors.

Once the bus was full enough to be viable we set off from Dunedin on February 20.

It was early in the day, too early for a beer, so our first stop was Lawrence for ice cream (no hop flavoured, sadly). Then it was our way up the highway to Cromwell’s Stoaker Room for lunch. We squeezed into a marquee with a mob of white-clad henparty-goers supporting a bright pink bride-to-be. None of them seemed to be interested in the slightest about our noble advocacy mission, so we ignored them and got a pre-taste of ales we would be finding further on up the road. And a great lunch!

On to Queenstown to make sure we got those festival goers among us to the bus terminus for their ride up the mountain to partake in Coronet Peak Skifield’s Beers and BBQ. It was this attraction that had helped fill our bus, actually.

The rest checked in to their various accommodation and then set out to the many lovely bars, most of which were extra empty, but serving fine ales in relaxing atmospheres, due to the usual rabble being several hundred metres higher in altitude.

Speaking of Altitude, that brewery’s beers have certainly made their mark on the Queenstown culture. After several hours of tasting and chatting the whole mob showed up from the snow-free ski-slopes and filled the bars. With their blue wristbands we knew who to chat to about the range of beers that had graced the festival. Some of us soon left them to it (certain ones drinking wine?) and retired to steel ourselves for the brewery visits on the morrow.

Breakfast was enjoyed in the many interesting restaurants, all specialising in something a bit different. Then we boarded the bus to Wanaka over the Crown Range, stopping for a view, and then for coffee or morning ales at Cardrona Hotel, sitting outside in the garden and then posing in front with the cool old car that must feature in a million pictures.

We ordered takeaways which we ate at Jess and Simon’s Rhyme and Reason, where we were served by Chelsea and informed and entertained by the accommodating and knowledgeable Simon. 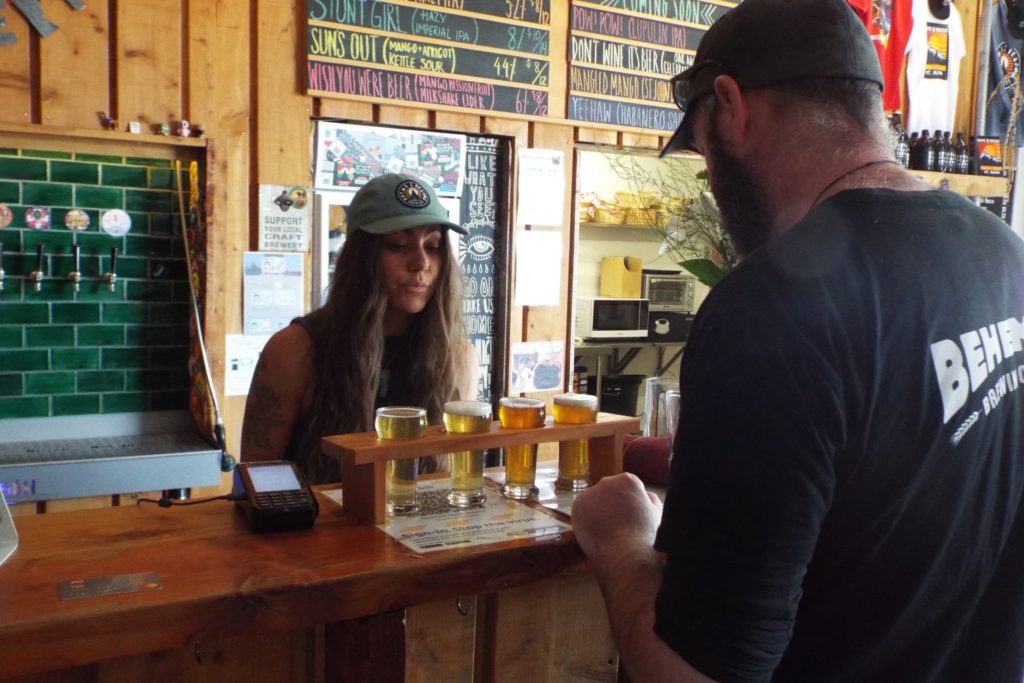 Next stop was Cromwell to check out the Otago Brew School. Geoff and our fellow traveller Grenville described the set up and the interesting characters, many of whom graduated and are now contributing significantly to New Zealand’s craft beer industry. (Grenville being one of them.) The beer they had been making was sampled and found to deserve an A pass grade.

More ice cream, this time next door to the Stoaker Room, then we bussed on to Omakau in 34 degrees of thirsty temperature.

Last year, Knobbie Clark at Lauder tempted us with locally-made ales, but he has sadly had to close that venue. He and Sam of Ferris Road suggested we check out Omakau’s Commercial Hotel where a keen young fellow is making his own beer on the premises. His brewery goes by the name “Dark Horse”. This was new to many of us and we will be back. 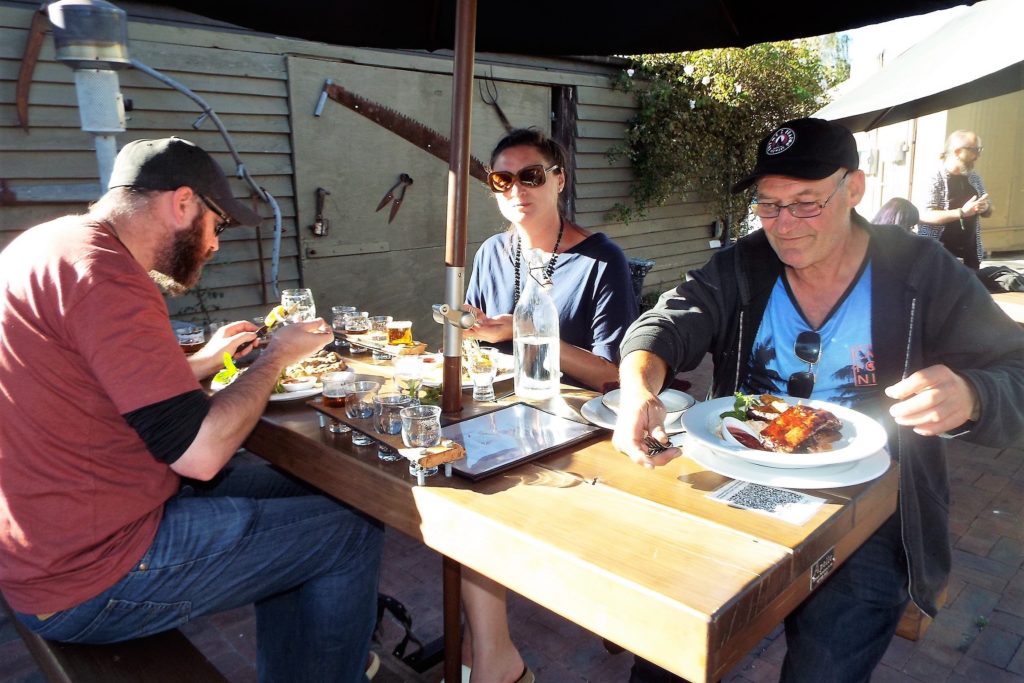 Eugene Whakahoehoe is making excellent beer in his tiny set up in a shipping container. We were intrigued, amused and impressed in equal measure. He uses triply-treated council supply tap water and the beer is very good. We would be keen to just soak up the atmosphere of this historic building and sample his next brews another day in the future. I could have listened to Eugene’s stories all evening. But, the bus was in danger of turning into a pumpkin, so it was a warm two hour drive home, and we were dropped off at our cars, thanking our driver Ross and also Wyn for letting him drive us. We were extremely effusive in our thanks.

“It was all about the beer,” we agreed.