With the growing popularity of craft beer in New Zealand, we have also seen a change in the way our beer fridges look. No longer are beer fridges shades of green and brown, they now resemble the walls of art galleries full of delicious pieces of art waiting to be drunk!

I chatted with illustrator Rebecca Ter Borg, who is the creative mind behind the artwork featured on many of the delicious brews to come out of Garage Project, including the Hāpi Sessions beers originally released in 2019. If you know me and my hazy palate, you will know that I absolutely froth over No Dreams Till Brooklyn, which is an oat cream IPA brewed in collaboration with Other Half brewing in Brooklyn and is one of the four tasty beers from the Hāpi Sessions.

JL:  Beer lovers can find your artwork in most beer fridges around the country, but how did your illustration journey start and how did this lead to designing labels for some of the tastiest beers in NZ?

RTB:  A childhood of obsessive drawing led to a path of illustration. I studied at Massey University a long time ago and have since then done some varied illustration jobs. Garage Project labels are a bit of a who’s who of NZ illustrators; they’re such fun briefs and they really let illustrators let their personal voice through, which is not always common in commercial illustration briefs. I met Tim Gibson, one of their designers, at Chromacon where lots of illustrators and graphic artists get together at a big bi-annual indie art event. 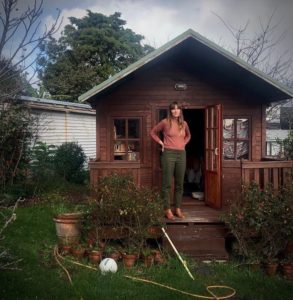 JL: What is your go-to beverage after a long day of work and why?

RTB: You may not want to include this one as I’m not really a big drinker myself! I did like the freshness of the Hāpi Sessions beer cans that I illustrated though.

JL: What inspired the dreamy artwork behind the Garage Project Hāpi Sessions beers?

RTB: The original concept behind Hāpi Sessions was thinking of it in terms of a musical collaboration. I tried to come up with some atmospheric, fairly loose concepts with a bit of flow that could all link up visually. The team at Garage Project picked the flower/water sketch. I tried to keep the lines organic and intuitive as much as possible while juggling the technical aspects of over-lapping borders and making each label work singly as well as the whole.

JL: How do you think your illustrations add value to the beers that they are featured on?

RTB: I like to think they are visually appealing (I’ve been sent pictures from people who have cut out the cans, flattened and framed them!) but I think one of the best things about the Garage Project can designs is that they are unafraid to use illustrations that are so far from the typical associations with beer and beer branding, that it broadens the audience and creates a more inclusive vibe.

JL: We have seen a lot of incredible beer art from you over the past couple of years, can you give us a preview of what is in the pipeline for the rest of 2020?

RTB: The thing about freelance life is that it’s full of surprises and you don’t usually know what jobs are going to pop up! I do have a few group exhibitions coming up and projects that I completed earlier in the year will be released in the next few months (there can be a long delay time between completing a job and seeing it released in the wild). And, of course, I hope there will be time for some personal projects, which usually take the form of prints and stickers that I sell on the side.

JL: Apart from in our fridges, where can people see more of your incredible work?

RTB: I do have a website but I’m probably better at keeping my Instagram up to date @rebeccaterborg_illustration or www.rebeccaterborg.com

Joshua Lee, aka Hazzy_Hunter, loves a good hazy IPA. He reviews hazy and not so hazy finds on his instagram page @hazzy_hunter which he started as a way of introducing more friends to craft beer in the hope of having more buddies to drink with at the pub. I remove all the beer lingo from my reviews and write them in a way that even a Heineken drinker can relate to! When I'm not drinking and writing about beer I'm grafting away at my next design-related project.