Get ready for the next new IPA experience: dip-hopping.

Liberty Brewing were first cab off the rank in New Zealand with the new hopping technique, using it for their entry in the Smith’s NZ IPA Challenge in late June.

The beer was called, simply, Hop Dip. They doubled down on the dip for his Malthouse West Coast IPA Challenge entry, Parallel Universe.

Joe Wood of Liberty said he saw a mention of dip-hopping online and thought “What hell does that mean?” 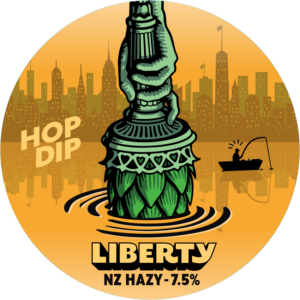 “I researched it and found out a few methods people have been trying in Portland and thought this is a good opportunity to give it a crack.”

Ironically, the technique was created by the giant Kirin brewery in Japan and brought to craft circles, it seems, by Gigantic Brewing in Portland after a visit to the country.

Kirin started playing with dip-hopping in 2021, creating a technique that accentuates pleasant hop aromas while reducing the onion and grassy flavours, notably those created by the essential oil myrcene.

How it works, for tech-heads, is that hops are put in a fermenter and covered with some hot water or wort (around 75-80degC) for an hour or so before the start of fermentation. This creates a kind of hop tea.

Gigantic employed the hot water approach while Niko Tonks, of Fair State Brewing in Minneapolis, did a dip-hopped collab beer with Three Floyds using hot wort for the dipping. He described that beer as an aromatic IPA – like a West Coast IPA but without the pungent onion and garlic aromas.

The combination of temperature and time causes the myrcene to blow off, removing the grassy onion notes, and there is also some biotransformation of myrcene into the more floral linalool and geraniol.

Wood is certainly a convert to the style. He pumped some hot wort onto about 10kg of the trial hop NZ102. The rest of the wort was then added and the beer fermented as normal with a hazy yeast before a double dose of dry-hopping.

He did note that the extra hop material caused their hazy yeast strain “which is normally pea-soupy” to fall out of suspension more quickly than normal, so the beer much clearer than he expected.

But the flavour was mind-blowing.

“It’s really hoppy all the time – it starts hoppy, stays hoppy, finishes hoppy and it’s quite complex as well; there’s lots of those bio-transformed hop flavours like tinned fruit, peaches and lychee.

“I just reckon for a 7.5 per cent beer, it was wet and moist and cleansing. It was like waves of hops crashing up on the shore.”

Would he do it again?

“F*ck yeah! We’ve already got another one planned. It will be interesting to see what other flavour compounds we can get out of hop varieties we’re already using.

“By getting the myrcene scrubbed out, the other oils that are in there – and are quite pleasant – get to show themselves a bit more. When we did this, the smell coming out of the blow-off tube was quite grassy.

“It does require some faffing about – but if you’ve got a limited amount of hops in your arsenal, it gives you more tools to get different flavour profiles.”

Festivals get flexible as they adjust to Covid