New Zealand Hops Ltd are making a concerted push into North America on the back of the in-demand Nectaron.

Last year the co-operative hired Meagen Anderson as business development manager in North America, her appointment coinciding with the release of Nectaron and a deal with British company Totally Natural Solutions to make branded hop oils.

Anderson knows her hops. She started in the industry working for Boston Beer based in Texas where she “went bar to bar in the mid-2000s trying to sell Samuel Adams Lager to people who only drank Coors”.

A certified cicerone, BJCP judge and trained in hop sensory analysis, she also worked for a hop processing company in Idaho before joining the prosaically named Kalamazoo Spice Extract Company, or Kalsec, which patented light-stable hop acids, so breweries could put beer in clear glass and not risk skunking.

Her knowledge around hops (did you know there are 61 key flavour drivers in hops?) is matched by a passionate story-telling ability and she believes a push to bring Nectaron pellets and oils to the American market will be transformative for the industry here.

“We’re still establishing ourselves in North America – they don’t know who we are, but they know our hops – so I’m spending time telling the story of the co-operative, giving that provenance to the Nelson region,” Anderson tells Pursuit of Hoppiness from her Michigan home.

That aside, what brewers want are the flavour and aroma notes Kiwi hops are renowned for, with Nectaron an outstanding example of that concentrated flavour.

“Nectaron has had a dramatic impact,” Anderson says. “I haven’t seen people this excited about a hop since Idaho 7. It’s got those tropical, pineapple characteristics brewers are constantly trying to capture with dry hopping.

“The way it delivers this aroma in both the hot and cold side is astounding. It’s just giving this charge of flavour they can’t get anywhere else. Looking at the demand I’m getting from craft breweries here, people want in – it’s happening so fast now.”

Anderson is sold on the use of hop oils for what she calls “tuneability” at the dry-hopping stage.

“Concentrated, pure natural hop extracts soluble in beer and other beverages – they are quite valuable actually.”

She says the method used by TNS preserves the best qualities of the hop with minimal impact.

“Most hop oil producers use vacuum distillation which is heat, pressure and time, all of which are very bad for hops –  but for a long time that’s all people had. But TNS has patented super-critical CO2 extraction of hop oils from pellets.

“Super critical CO2 is between liquid and gas form and it allows you to separate things at fine level; it basically pushes the vegetal material away and leaves you with pure hop oil and you’re being very gentle with hops.”

By using hop oils in conjunction with pellets, brewers can reduce the use of pellets in dry hopping and as a result waste less beer, as the pellets suck up so much liquid.

Anderson says other sustainability gains with oils are that they’re cheaper to freight, can be stored at ambient temperature for up a year – so no electricity wastage on refrigeration – and she says the oils make the same volume of pelletized hops “go 100 times further”.

And speaking of going further, there are strong prospects for New Zealand hops to be used beyond beer, and Anderson believes beverage giants such as Coca-Cola and Pepsi will be interested in the oils as well. 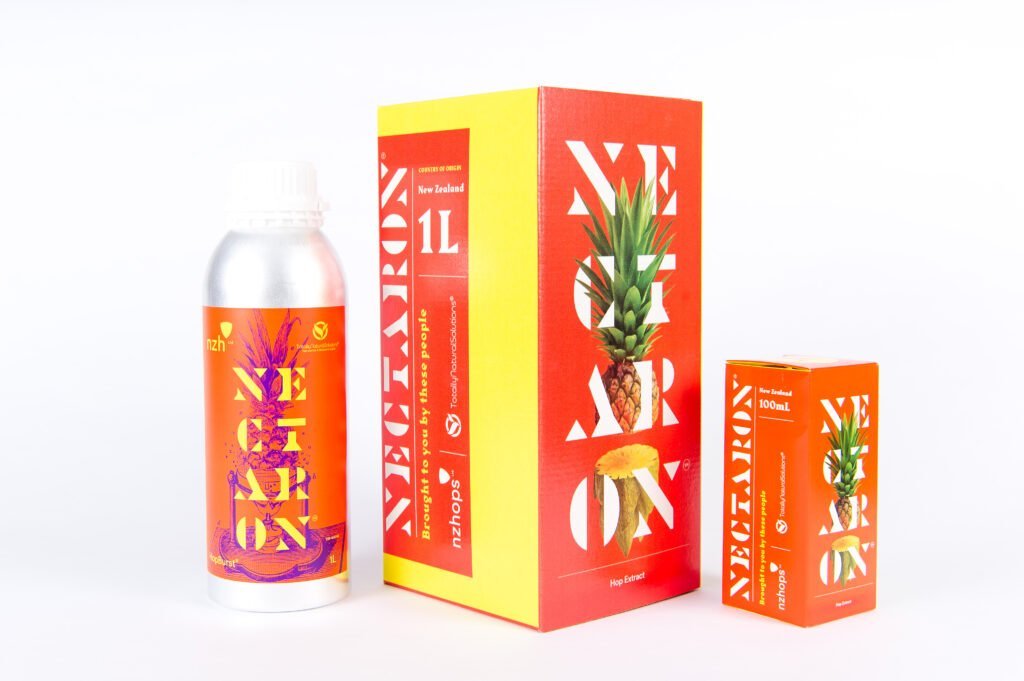 How Nectaron Hop Oils are being marketed in the US.

“The fastest growing beverage segment is non-alcoholic, so I see these oils going into non-alcoholic beers and alternatives like CBD [cannabis] beverages. Because hops and cannabis are cousins, these synergies play together, the flavours work together.”

There’s also the perception that hops have health benefits in terms of relaxation and sleep and they have advantages over pharmaceutical equivalents because they’ve been approved as safe for use by the US Food and Drug Administration.

All this gives New Zealand “a platform for to talk about this amazing, unique crop and all the uses it has”.

“It’s great story around purity and sustainability – and Nectaron has such an interesting branding personality, visually it tells you it’s pineapple, it makes it an easier story for me tell.”

Getting that pineapple note from actual hops rather than flavour additives is a big plus for many breweries in America and by using the Nectaron trademark they are telling consumers that the flavour is all natural.

“As a result some of the biggest and most important craft breweries in America want to put Nectaron on their label.”

On top of all this, Anderson, notes – she’s selling a New Zealand product at time when “everything New Zealand does is amazing” thanks to our successful response to Covid-19. “It all adds up to such a great story.”

Domestically, given the publicity around the hop last year it’s no surprise there’s been strong interest.

All the same, it’s a surprise to learn Nectaron has already passed Nelson Sauvin in terms of contracted volume, a fact which only slightly surprised NZ Hops sales manager George Tunstall. He said around 60 New Zealand breweries have contracts for Nectaron.

“I always knew this would go off like a cut snake – because it consistently delivers what it says it will.”

Luckily for NZ Hops, Nectaron crops weren’t hit by the Boxing Day hailstorm and Tunstall expects a harvest of around 45 metric tonnes, up on the 24.5 tonnes harvested last year.

That volume should grow in years to come as Nectaron is a strong-growing, high-yield variety. It’s only detrimental characteristic is that it has a short picking window of only  few days – but that’s offset by the fact it’s ready for harvest earlier than other high-demand varieties such as Nelson Sauvin.

In terms of beers showcasing Nectaron, the most visible examples are strongly-branded Sprig & Fern Nectaron IPA (see our review over the page) and Cassels Nectaron IPA but given the high demand from brewers we’ll be seeing – and tasting – a lot more Nectaron this year.