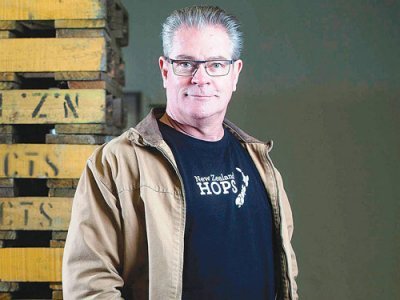 When people look back on the history of New Zealand’s beer renaissance over the past 30 years, many of the key figures will be brewers – and for good reason. They are the people who gave drinkers choice on the shelves and on tap beyond ‘fizzy brown sweet stuff’ and ‘fizzy bland pale stuff’.

But someone who is worthy of a bit more than a footnote is Doug Donelan, who recently stepped down as the chief executive of New Zealand Hops Ltd. At first blush, it all seems a bit weird, the overlord of what is, at its core, an agricultural brokerage company having a central part in the story of New Zealand beer. But, after a two-hour chat with him over pints of malt-forward mild, you quickly realise his role was much, much greater.

Donelan’s start in the brewing world came from a fascination that he and his brother, Matt, developed at their Sydney home.

“I would try and ferment just about anything,” he says. “I fermented some pumpkins once. It was surprisingly good. It didn’t look like it for a while because there were all these festering bubbling buckets of stuff in our shed that my mum used to scratch her head over.”

It was a Coopers bag-in-box kit which was the catalyst for a working life in beer. “Matt brought it home and said: ‘look at this, we can make beer out of this’.”

The pair shared a fascination for beer, hunting out then-exotic imports like Carlsberg, travelling through the United States in the 1980s when the likes of Sierra Nevada and Samuel Adams were just getting going, and taking in Europe’s beer culture.

There were not too many breweries around in Australia at the time, although Matilda Bay was making its pilsner (“It is probably one of the best beers ever made in Australia, I still maintain that today,” Donelan says). So, the pair went into food science before landing jobs at Hahn Brewing Company under Australian legend Chuck Hahn.

It was Lion’s purchase of Hahn Brewing which, in a way, made Doug Donelan into who he is today. He did a range of jobs under Lion – research and development, product development, packaging, etc. – before the Hahn brewery was turned into the Malt Shovel Brewery, producing James Squire in the 1990s after Chuck Hahn talked the Lion overlords into it.

No one was starting their own brands at the time, Donelan says, so Malt Shovel had to prove it would work without any assistance from Lion. “We lasted a couple years before we could convince the company to distribute for us.” Hustling for sales, setting up brewpubs and kicking down doors to move product and create opportunities created “a lot of fire in the belly”, he says.

He took that fire to New Zealand Hops when he became its first chief executive in 2006. People thought he was mad, trading in a very well-paid job with share options and bonuses under the Lion umbrella for a life across the ditch. But it all made sense for him. “My daughter had turned five … and I didn’t want her growing up in Sydney going to school where we were. We lived in Bondi and really lived the Sydney life. But as a parent you start thinking about where you want to live and what you want to do.” He also really, really loved Nelson after doing beer judging there.

New Zealand Hops was in a horrible state at the time. Almost all its products were bought by big commodity brewers like Heineken, which drove prices extremely low. Meanwhile, two varieties made up 80 per cent of growers’ volume. Nelson Sauvin was not popular at all – too out there and weird – while Motueka had effectively died; it was only still grown because Donelan had insisted on contracting it for James Squire Pilsner during his time at Lion. It was also impossible to sell a specialty hop overseas to big commercial brewers.

The catalyst for change? Homebrew. New Zealand Hops targeted Brewcraft in the United States, which was owned by a Kiwi. “Homebrewers at that point were becoming commercial brewers, so stories started forming around New Zealand hop varieties,” Donelan says.

Kirin and Anheuser-Busch took on large volumes of Motueka and Nelson Sauvin, respectively, for smaller-run products around the same time. By the time those companies reduced their takes, those homebrewers had created the buzz for New Zealand’s unique hop varieties.

New Zealand Hops also invested heavily into research and development, pairing with the Crown research institute Plant and Food to get the likes of Riwaka and HORT 4337 (the next superstar, Donelan says) to the market. But that market has changed. The likes of Freestyle Farms (part of the Hāpi research group along with Garage Project) and Hop Revolution have hit the scene, while more will come. It is all a bit edgy at the moment, but Doug expects everyone to start getting along very well.

“Everyone at some point is going to have to realise that, as a grouping, it has to be ‘New Zealand Inc’.” Taking on the world together will be better for the industry, those companies and drinkers in the long term, he says.

While only 60 years old, Donelan has decided to try out retirement. He still has involvement with Golden Bear, plenty of people have offered him work, and he is off to judge the World Beer Cup this year. “I know a huge amount of people in the industry … I don’t want to lose that.” He also expects to get back into brewing. Retirement, he says, is “weird”. “But I’m really enjoying not having to get up and go to work every day.”

Jono Galuszka’s beer enlightenment involved jugs of Tūī at The Fitz in Palmerston North, bottles of Epic Pale Ale in a Wellington back yard, pouring pints of New Zealand’s best at The Malthouse and winning the Brewers Guild of New Zealand Beer Writer of the Year award in 2015. He especially loves drinking his home-brewed saison after a hard day in his vege garden.

Scooters, pints and pubs in paradise