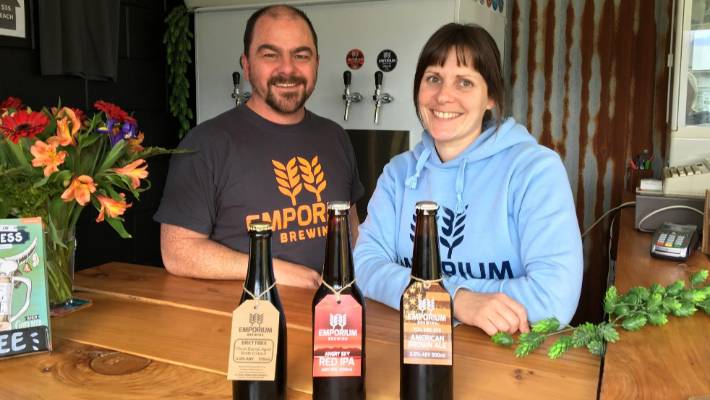 Paul Finney hopes the last setback for his business will be just that: the last.

Finney and his wife Laura run Emporium Brewing in Kaikoura – a dream that’s flipped over to nightmare more than once since they started five years ago.

The first shock came with the big Kaikoura earthquake of November 2016. The brewery had just got underway, with the first 50 litre brew in the fermenter. The earthquake wreaked havoc in the brewhouse – but that was something they could fix. Unfortunately, that wasn’t the case with the roads around the popular whale-watching tourist town.

What should have been a great spot for a new business – a town full of curious tourists looking for a local drop – turned into something of a dead end.

Then Emporium was caught up in the collapse of Beer NZ, losing a chunk of money as the beer distribution company went bust.

And just as things were looking up, their world was rocked by the Covid-19 pandemic, the lockdown, and the complete halt to tourism – both domestic and international.

But Emporium got a huge jolt of positivity from their second-straight appearance in this year’s New World Beer and Cider Awards Top 30.

After cracking the big time with their Witbier last year, they came through again with perhaps the most relevant beer they’ve brewed: Drop, Cover, Hold – a tropical sour brewed with a strain of Norwegian Kveik yeast. It’s an incredible beer – lightly sour with punchy pineapple on the aroma and flavour thanks to the unique characteristics of the kveik strain. And it’s the beer that was in the tank the day the earthquake hit – hence the name doubling as a public service notice.

The award was about more than getting a place on the shelves of New World supermarkets around the country throughout June, it brought them exposure they could never afford, thanks to the wider marketing clout of New World. As a result of the awards marketing, the Seven Sharp current affairs show picked up the story and brought the Emporium name into households across the country.

“It is hard to judge brand awareness as we are still growing, but we have had a lot of good feedback in the Facebook forums around our fresh-hopped beer this year, and that came just after being in the Beer Jerk box with our Imperial spiced ale, Reuben the Red, and our hopped saison, Rapscallion, which both were well-received. 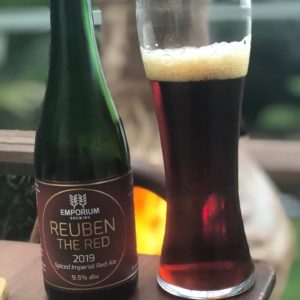 “To then follow it up with the New World win, we are riding the crest of a wave. We just need to capitalise on that.”

The appearance on Seven Sharp opened the eyes of Kaikoura locals to an award-winning business in their own backyard as well as having reach further afield.

“I think around the country, there have been more people realising they can buy local,” Finney said of the Covid-19 lockdown period. “Kaikoura is a bit of a hard nut to crack in that respect, but the interview on Seven Sharp helped out a lot.

“By being on TV, we sold a heap of boxes of beer after that.

“The other thing it did do was give us access to the North Island. We have probably sold one keg to Auckland and less than five to Wellington in the whole five years we have been going, so people buying boxes of our beer in the North Island was nice to see.”

Finney knows that a month’s worth of promotion through the New World stores won’t be the definitive antidote to all the hard times they’ve had, but it was just the boost they needed to refuel the resilience tank.

“I think the resilience was starting to run low.  I know we are a bit fatigued by it all. In all honesty, we just want some normal years. The last two years we have turned profit. We’re waiting on this year’s, but we would be very close, and that is despite missing half of March, earthquake recovery, beer distribution going bust …

“We seem to have a viable business but we are getting weary of saying ‘as long as we are going this time next year, we will have cracked it’. In a way though, it does give us a competing edge as we are the brewery from Kaikoura who is still battling on.

“Our main concern in town is the job loss. As a town that is very focused on tourism the town is going to suffer quite badly. Time will tell if we are resilient enough to weather this new storm. Emporium will keep soldiering on though, as Dory said in Finding Nemo ‘just keep swimming, just keep swimming’.”