For most people, owning a brewery of one’s own comes after years of working in the beer industry, a lot of planning and a decent amount of investment.

For Lee Ann Scotti, brewer and co-owner of Belgian-style nano brewery Craftwork in Oamaru, it was an out-of-control home brewing hobby, a broken oven and no space left to cook in her kitchen that pushed her and her partner, Michael O’Brien, to begin a small, commercial brewery in the stone basement of her house.

“My kitchen was covered in fermenters… and I’ve got three kids. They were feeling a bit uncomfortable and their friend’s parents, coming into my kitchen and seeing all the blub blub blub blub blub [fermenting] going on, and it was just getting a little bit out of hand trying to fit hoses through windows – I couldn’t even cook properly, and I actually blew up my oven as well.”

Scotti says blowing up her new-ish oven by heating up the entire surface as she put a large pot of wort between two elements, pushed her to come up with a better way to go about her brewing hobby.

“[I have] my stone basement under my house and we just thought, let’s clear it all out because it just has recycling and firewood [in it],” she says.

”We decided, why don’t we just make a proper space that’s easy for cleaning, and then I can still have my kitchen for cooking. And whilst we were doing that, we just thought, ‘well, why don’t we just get the council in just to see what it would take to make this able to be commercial?’ And in fact, there wasn’t that much that we had to do.”

The council asked Scotti and O’Brien to line the ceiling of the basement to cover the piping, creating a sort of sealed box, and to put anti-fungal paint on the whitestone walls.

With so few hoops to jump through, Scotti and O’Brien thought they “might as well” give the commercial brewing thing a crack, and bought a 50 litre Braumeister to help them on their way. That was back in 2014. 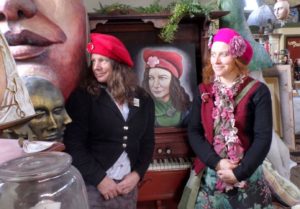 Lee Ann Scotti is the face of Craftwork’s Red Bonnet, which is based on a painting of her by Donna Demente who owns the famous Grainstore Gallery in Oamaru’s Victorian Precinct.

And just as Scotti fell into being a commercial brewer, she also fell into her love of brewing.

Back in the early 2010s, Scotti was a mother, a teacher and she loved cooking. Then, one day at Riverstone Kitchen, she tried Parrotdog’s Bitterbitch IPA after a suggestion from beer and wine buyer, Jules van Costello.

“And wow, I just thought I want to make that. It made me want to brew with hops … I just loved the fragrance, the tropical hops,  and it was like, wow, I really love this beer,” Scotti says.

“I was never doing any science or anything like that, just lots of cooking … my father was a chef, [there were] lots of cookbooks in the home. So just sort of knowing what you’re supposed to do, how to make most things, and then then getting creative.”

Scotti says that’s how she approached home brewing too.

“I think [my enjoyment with cooking] probably made me feel adventurous,” she says.

“I quickly wanted to go off the path of kit brews and really explore using spices. I got bored with just kits and the recipes that were available. I just really wanted to explore, and I think being into cooking probably helped.”

Despite an IPA being the beer that truly started Scotti on her craft beer journey, Craftwork focuses on Farmhouse and Belgian style beers, even using a coolship (or koelschip in Flemish) to collect the wild yeasts for fermentation.

“We couldn’t get a lot of Belgian beer, not like you can now, which is pretty much why we brewed our own Belgium beer, because we couldn’t buy everything we wanted.”

As Craftwork has grown in popularity over the past seven years, Scotti says it has been difficult at times.

“I was doing part time teaching, and doing a lot of the brewing and the paperwork to do with Craftwork and trying to promote us and grow us – and that was really hard,” she says.

“I was doing reading recovery and writing for reluctant writers, so you’re always trying to think of ways to stimulate and inspire the kids. It was just really hard to have to focus on both, and I just knew that if I quit teaching, I would really be able to give Craftwork everything. So that was quite a big leap and a bit scary, going from a fairly well-paid job to a very unstable, unreliable income.”

She says it has also been difficult on a personal level.

“As a female brewer, it can be sort of novel once people know you’re a brewer. I do struggle and feel a bit annoyed how I have to … not prove myself, but people never assume that Michael isn’t the brewer, yet they often assume that I’m not, that I’m his helper,” she says.

Craftwork has grown during its seven years of operation albeit slowly. Scotti and O’Brien started with one 50-litre Braumeister kit – now they have two, plus a tasting room in central Oamaru. The pair do a double mash in each of the Braumeisters when brewing, making a total of 200 litres of wort by the end of the day – a process which Scotti admits leaves them “pretty pooped”.

“It’s really exhausting. Michael is still cleaning at eight o’clock at night, and I’m long gone. I’ve gone upstairs to make dinner and just be normal because I don’t really like working after 6pm. He’s a night owl and I’m an early bird, so I always get the brew going, early, and then he finishes the day. It’s just too much, we are getting too tired,” she says.

The mammoth effort being put in by Scotti and O’Brien on brew days, and the fact they’ve now run out of room in their current space, has encouraged Craftwork to expand their brewery and tasting room – a decision which some people might think to be an unusual one for a pair of exhausted, middle-aged business owners.

“It’s really exciting … the [new] building is a beautiful Whitestone building, it’s twice as big as the one we’re in [currently], and we’ve got a 500 litre Braumeister on the water coming. So probably, in about three months, we will be in our new space – we’ll have more seats and we’ll be offering natural wines and a bit more Belgian-inspired food,” Scotti says.

The tasting room, 500-litre brew kit and a 1000 litre coolship will all fit into the space, with room leftover, and is just a short walk from where Craftwork are currently situated.

“So that is really exciting. That sort of capacity, it’s just ridiculous. We are ridiculous to other people, or other brewers, but I think that having the smaller barrels and just doing one [brew] at a time on a different evening means that we get quite a lot of difference in the terroir – that’s what we tell ourselves anyway.”

Scotti still has big hopes for Craftwork in the years to come.

“We’d like to work at our brewery for another 10 years, and we think by then we’ll be completely knackered,” she says.

“I would really like Craftwork to be a destination for people to come and meet us, drink our beer and eat the food as an experience of maybe an otherness, like a special treat – so you walk through the door, and everything feels right.”