The backbone of almost any successful beer is its malt. And after 17 years of operation, Gladfield Malt – and co-owner Gabi Michael along with it – could well be described as the backbone of New Zealand’s beer industry.

Gladfield, which Gabi and husband Doug started in 2004, has grown substantially since they envisaged selling the two-row barley they were growing on their farm in Dunsandel to brewers. “We had this crazy idea of making malt out of the barley that [Doug] grew, and it sounded like good fun at the time”, Gabi says.

“We didn’t come from the beer side of things, we came from the barley end of it. So it was kind of a unique view of the industry, from not knowing anything about how beer’s made – other than that it tastes good.” – but knowing that all of the malts at the time were being imported, so we thought we should do something about it.”

The pair started with an 18-tonne batch of pilsner base malt, which at the time, seemed like an awful lot to try to sell. But Gabi, taking on the role as the sales and marketing manager, worked hard to build strong relationships with the country’s brewers in those first few years – particularly in the South Island – to shore up the demand for their malt. “We managed to get some traction going. It took us a long time, probably a good five years, to get some credibility and to learn the trade as well,” she says.

“They all began asking for different malt flavours and wanted us to make ale (malt). Back then, Richard Emerson was a big fan of Maris Otter of course, like everyone, and he said to us ‘look, if you make something that’s good enough or better, I will definitely buy from you’. And Doug managed to pull that off. So [Richard] switched to our ale malt and ditched the Maris Otter.

“That was the beginning of it all really, because all a sudden, Richard Emerson – such an amazing brewer – was singing the praises of our malts and helping us get that credibility,” Michael says.

Today, Gladfield supplies malt to countless breweries across the country – and even internationally – selling to both small craft operations and Aotearoa’s biggest brands. And it is Gabi, as the marketing and sales manager, who has been the main person cultivating those relationships over the years.

“I can’t explain it, but especially when we were starting out, I was able to hear what the client wanted, even though he wasn’t [explicitly] telling me,” Michael says.

“It’s just this intuition. I just go around and the client mentions something off-handed. Like in Brisbane, a client started to complain about freight. I said, ‘how about if we put a warehouse here, would you support us?’ And they looked at me and said, ‘wow, I was just wanting a better price from Melbourne, and you’re  going to put a whole warehouse here for me?’ So it’s not the traditional thinking, more the people-first thinking,” she says.

Since starting in the malting business, Michael has realised a passion for beer and brewing she never knew she had. Coming from Brazil, she says she has always been a beer drinker, but until she and Doug started Gladfield and interacting with those in the industry, she had little interest in anything other than a watery lager.

“Obviously we knew about malt specifications and how to create a malt, but when we started visiting and getting quite intimate with these brewers and understanding the process, then a whole new passion started – especially for myself,” Michael says.

It’s a passion which she can thank her mother for, in many ways. When Michael was growing up on a beef farm in Brazil, she dreamed of becoming a farmer like her dad, something he did not approve of. So her mother advised her to go to university and get a degree – she chose to study veterinary science.

“I thought, I’m going to become a vet because then dad was going to need me for some things on the farm. I studied for five years, and absolutely loved it. I also liked the administration side of the farm, so while I couldn’t be the one on a horse all the time, I could manage the books and make decisions on what bull to buy and all that,” Michael says.

“I had those two things going for me, and dad was still very reluctant to have me involved. And then mum gave me a second set of advice, which then changed my life forever: ‘Why don’t you go overseas? It’s the prime time of your life, no strings attached.’ And I learned that New Zealand had an exchange trainee programme to work on a dairy farm.”

Michael says while she hated the idea of dairy farming, her mother talked her into taking up the opportunity, and in 2003 she landed on a dairy farm in Brookside, Canterbury. She worked there under the owner’s daughter, who ran the farm, and slowly learned English over those first few months. 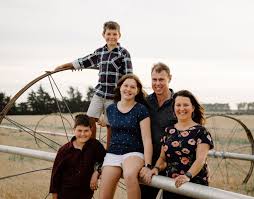 Gabi, Doug and their children on the Gladfield farm.

On Boxing Day, a very homesick Michael went to the Ashburton races and met Doug, her future husband. “And honestly, life has never been the same since,” she says. ”It’s been a roller coaster ride.”

It was only the next year that Gabi and Doug started Gladfield Malt. “I never thought I’d be selling malt, though. I thought I’d be managing the farm while Doug played with the malting. But I love the malting business as much as – or probably more – than he does,” she says.

“Brewers are such an easy bunch to get on with, they’re very open to women … I have never in my entire time in New Zealand felt that I wasn’t welcome in the community here and in Australia. They weren’t buying from me because I was a woman – they were keen to hear from the owner, and if the owner was a woman, then cool, let’s get on with it.”

But, she adds, that has not been her experience everywhere. “I went to Japan, and I didn’t feel the same. I had to really fight hard to get their attention and to get them to listen to me, which was quite an eye-opener. I also went to Brazil and again, [I got] the same reaction as in Japan – where’s your husband? That was the first question they asked me.

“I definitely felt uncomfortable,” she says. “In some meetings being a woman they didn’t take you seriously enough, and every third question was ‘where is your  husband? Why is he not here?’, making it very obvious that they would not be doing business with me unless they met my husband.”

Despite some challenges, Michael’s passion for beer has only grown – and for the past five years, she has been home brewing herself.

“It’s the alchemy of the brewing which fascinates me,” she says. “I’ve been home brewing for a few years now and no brew is the same. There are so many variables and I do have a lot of respect for brewers because there is a lot that can change. That’s why craft beer has been so successful in my opinion, because it’s that variety, and it allows the brewer to be creative, like an artist.”

Michael says she’s still striving for what many of the professional brewers are – consistency from brew to brew. But the biggest allure of beer for her, is perhaps one of its most unique properties.

“That white foam is what attracts me to beer the most,” she says, “And it’s something that I’m proud of, because it’s what the malt makes. So I know the brewer is doing a good job with the malts and I get quite excited when I pour a beer and it pours perfectly with that head.”

This story is part of the Beyond The Beer series, sponsored by the Brewers Guild of NZ.