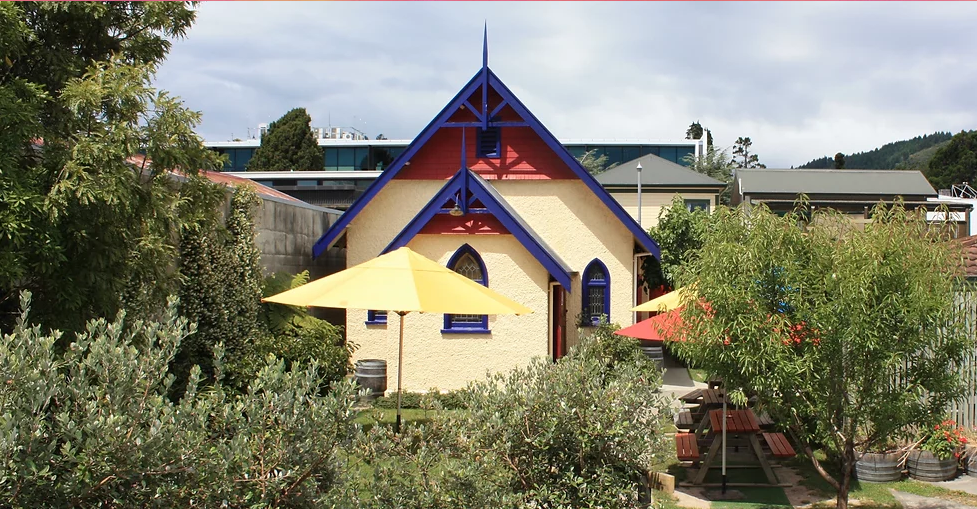 For me, Nelson is the spiritual home of craft beer in New Zealand. It is where Mac’s first kicked it all off, and it is also where our tasty hops come from. I had a family Christmas in Nelson this summer, so I took the opportunity to re-acquaint myself with the craft beer scene in Nelson and environs.

While the family turned green with the swell on the Interislander ferry to Picton, I had the onboard craft beer offering – Renaissance Island Hopper – an APA of 4.5 per cent. Firm but light-bodied with a sherberty note in the aroma and taste, this was a pleasant afternoon quaffer.

That night in Picton, I went looking for craft beer. The old Oxley Hotel has been made over as Monteith’s bar and restaurant. I went in for a fresh and tangy Tuatara Hazy Pale Ale and listened to the wāhine karaoke singers. At 11pm the only place going for craft beer was Seumus’ Irish Bar down the road, so I went in for a pint and the craic. Along with the quintessential Guinness, they had beers from across the Lion craft beer range, including from the recently-acquired Harrington’s. I had the big, bittersweet Emerson’s Birddog IPA which has become a bit of a favourite of late.

On the scenic drive to Nelson we stopped in at the historic town of Havelock and after some vintage shopping I went into the mock-tudor Captain’s Daughter for a lunchtime swifty. They had a range of local craft beers available, but I went for a pint of the malt-driven Kaiser Brothers IPA from Christchurch.

As a major tourist and lifestyle centre, Nelson has plenty of hospitality venues and it’s great to see that craft beer is a core part of the offering. This was the case at the pedestrianised top end of Trafalgar Street downtown, where al fresco dining and drinking is front and centre. Mac’s has a flagship bar and restaurant there – The Vic – where I had their quenching Pacific Pale Ale with its tropical fruit notes and reasonable dry finish.

Across the road, the Cod and Lobster Brasserie is an upmarket restaurant and cocktail bar where I managed to get the classic Hops on Pointe from Garage Project one sunny afternoon. Next door is Harry’s Hawker House which specialises in Asian street food but has a great selection of craft beer taps. When I visited, I stayed true to my Welly roots and had a citrussy Super Alpha Pacific Pale Ale from North End.

Just around the corner in Church Street is the East Street Café, a vegan restaurant, bar and music venue. I went a couple of times in the fortnight I was in Nelson and both times I had an High-Tide double IPA from local brewer Eddyline. Full-flavoured and powerful (8.8 per cent), this one has sweet malt notes in front of mouth and a great bitterness in the taste and finish.

No visit to Nelson is complete without a visit to local SOBA favourite The Freehouse. I went a number of times and sampled freely. I remember at some stage drinking Eddyline’s Stoned Fruit – an apricot sour ale of 4.8 per cent. Not as gnarly as many kettle sours, it had a bitterness that gave it a grapefruity, possibly salty, feel. On another night when I met up with a Scottish cousin who was in town, I had the malty Sutton Hoo, an amber ale from Motueka brewer Townshend’s. That night we also went to the cool Urban restaurant and bar and had oysters and real pork scratchings along with IPA from Golden Bear.

I made the trip to Golden Bear at Mapua Wharf outside Nelson on the way to the Abel Tasman National Park. I had the impressive Fat Toad IPA with its sweet tropical fruit aroma, big resinous bitterness and caramelly malt flavour with a berry note. It was 6.8 per cent ABV but it carried it well, as did their Seismic West Coast IPA – which was perhaps not as large in flavour.

On another day, I biked the rail trail from Nelson to Richmond and squeezed in a couple of brewery visits before having an epic mooch at the fabulous Richmond Antiques. The original Mac’s brewery is now the Stoke Brewery and the Stoke Dark from the handpull was choice: soft bodied with nice roasty flavours. At the Eddyline Brewery, in a light industrial area of Richmond, we had a vegan pizza and another High-Tide double IPA.

Downtown Nelson has new brewery – the Workshop Brewery – in New Street in a renovated factory space next to Sublime Coffee. I had a tasting tray that included a fruity lager, lemony pilsner, and a sweet and fruity hand-pulled best bitter. The big winner for me though was the XPA. More of a strong or old ale when compared to the lighter bodied XPAs around – it was 6.66 per cent, full bodied and sweet with a big bitterness and some oxidised notes. That is the one I would go back for a pint.

Finally, Nelson is the home to New Zealand’s first major craft beer chain – Sprig & Fern. I went to the original S&F in a renovated post office across the river in quiet suburban Milton Street in the east side of town. I had a Brut IPA which was dry with a big hop finish. I also went to the central city Sprig & Fern in Hardy Street and had the Scottish Export on Nitro. It was creamy with a light mouthfeel and sweet malt and chocolate notes. The finish was mellow hops and a slight roasty note – all making for sessionable drinking.

Nelson’s historic craft beer scene is well developed and is central to the local hospitality offering. It is well worth a visit as it gives the Craft Beer Capital a run for its money.