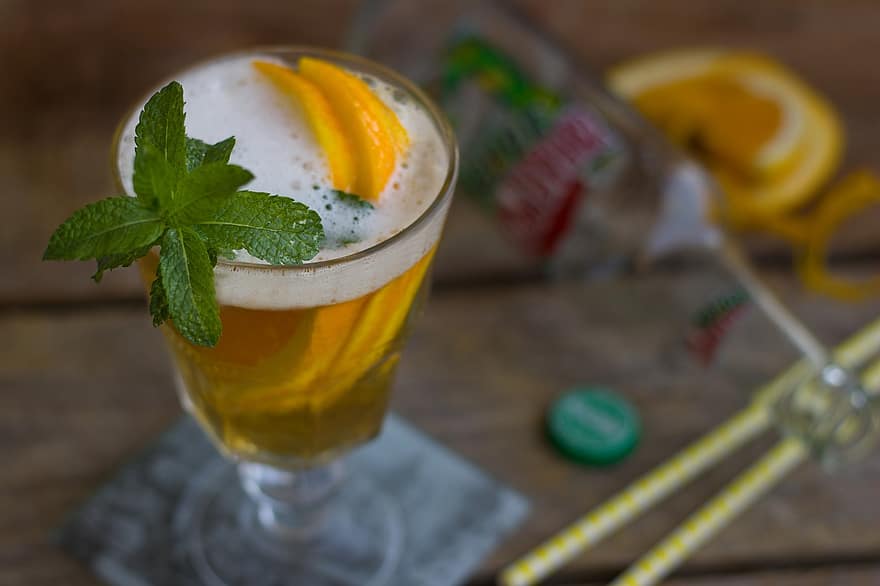 Sour beer is an umbrella term for a range of craft beers styles that all have noticeable acidic tastes and/or finishes. Ranging from light and refreshing, to zesty and saline, or funky and complex, they make excellent beer cocktails.

Kettle sours refer to beers where the wort is innoculated with lactobacillus – the same bacteria found in yoghurt and cheese – to make lactic acid. The same process is also used for Berliner Weiss and Gose.

Drop, Cover, Hold is a ‘tropical sour’ from Emporium Brewing a newish brewery in Kaikoura. This beer made this year’s Top 30 in the New World Beer and Cider Awards. It has a quenching taste like a sour peach juice with some sweet, sherbet action. With this I made the Juan Collins. In a Collins glass (or a Hoegaarden tumbler) add ice, 20ml lemon juice, 10 ml agave nectar, 30 ml tequila and grapefruit bitters if you have them. Stir and top with Drop, Cover, Hold. This is a great hot day drink, with quenching citrus flavour reminiscent of an old-school café orange drink.

Another kettle sour that made the Top 30 was Garage Project’s Electric Dry Acid Test. Dry hopped with aroma hops from NZ (Wai-iti) Australia (Ella) and German (Saphir) it had briny and lemony notes in the aroma and a punchy acid taste and finish. This beer suited a citrus-cocktail and I chose to make a version of the Vitamin C. Add 165 ml Electric Dry Acid Test to 30ml Bureaucrat gin and 60 ml of squeezed orange juice in a glass with ice, and stir. It tasted a bit Orangina, but with a nice quenching sourness in finish. A great aperitif cocktail with fruity goodness from the fresh OJ.

Many different fruits are added to kettle sours and they are also aged and hopped. One standout example of all this is 8 Wired’s Gypsy Fruits. It’s a dry-hopped, barrel aged sour ale that spends eight months steeping on organic grapefruit. The result is a big, ‘no prisoners taken’ sort of beer that you’ll either love or hate. Sherbet sweet aroma, intense sour and bitter grapefruit flavour, this one screamed out for Paloma-type Mexican cocktail. I put 1 part reposado tequila, 3 parts Gypsy Fruits add 1 tsp sugar syrup into a shaker with ice, gave it a light shake and strained into a martini glass. This was a big, powerful and dry drink that can also be lightened into a long drink with ice and grapefruit soda (and another tequila).

Berliner Weiss is a light and refreshing wheat-based sour beer style that is noted for its citrus flavours. Kereru makes an unfiltered version with feijoa. Turbid and pale it has yeast notes in a citrussy aroma, and a refreshing gentle sourness with wheat and feijoa. With this beer I again used tequila along with lime juice to create a cocktail reminiscent of the Matterhorn’s classic falling water, though the tequila added a little woodiness.

Yeastie Boys also make a white beer called White Noise. This is a delicate session beer: light bodied with a coconut note and a subtle spicy finish. This suited a cocktail with a bit more substance, so I made a Weissen sour. Take 30 ml Makers Mark bourbon, 10 ml lemon juice, 5 ml sugar syrup, 2 dashes of grapefruit bitters and 30 ml of White Noise and shake with ice. There is a sweet bourbon note amongst the lemon sourness which gives it a cocktail feel.

Bright and briny Gose is a salted, sour wheat beer. Parrotdog’s Gavin is made the traditional way – with coriander seeds and sea salt. The aroma reminded me of balsa wood and the sharp acid and briny taste gives way to a sweetish lemony note in the finish. I went the full hog with this one and made Jens’ Michelada Mash-Up using a recipe from a book by the London-Kiwi beer afficionado Jen Ferguson. It’s a bit culinary and the recipe is for 2 glasses. Whisk together 125 ml of tomato juice with a teaspoon each of Worcester Sauce and a hot sauce, one-quarter tsps of both balsamic and soy, and a pinch of cayenne pepper. Stir in the juice of one lime, add salt and pepper. Salt the rim of two large glasses add ice and add a slice of lime. Pour in half the mixture into each glass and top with Big Gav or another Gose and stir. This is a savoury drink that is quenching and spicy, but also great with fried food. It is also spritzy and vinegary. I also tried this with the Moa Crystal Lake Gose which is more approachable, so I added a shot of tequila for some tasty earthiness.

Gueuze is a funky and complex blended lambic beer from Belgium. The only local example I could find was made by Craftwork in Oamaru. Called Un Deux Trois this is a classy drop with a sour, woody and sherbety favour with a pronounced sour finish. Gueuze is beer’s equivalent to champagne so I made a champagne cocktail. In a champagne flute put a sugar cube or a small teaspoon of caster sugar, add 2 dashes of Peychard’s bitters and a single cognac (I used Courvoisier) and top with 1-2-3. This is just a little sharper than a champagne cocktail but has nice citrussy notes.

Finally, a Flanders Red with is tart with prune, plum and balsamic flavours. Wellington’s Te Aro make decent Flanders Red that weighs in at 7.9%. There is alcohol, dried fruit and some with woody sourness in the aroma. The first impression is light and vinegary, but red wine flavours develop and there are some woody notes in aftertaste. Overall pleasant and palate cleansing – a good effort. This I used for a Bloodied Belgian. On ice, stir one part Auchentoshan Springwood single malt, one part Martini Rosso, three parts Aranciata Rosso by San Pellegrino and three parts Te Aro Flanders red. This has a liquorice and herbal (almost medicinal) flavour that makes it a good bitter aperitivo.