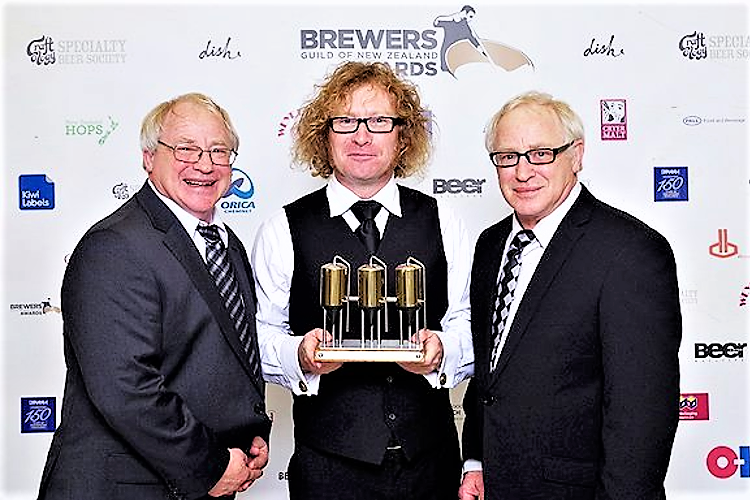 Doug Banks, a doyen of the NZ brewing scene, died in October. By way of tribute, we’re republishing an edited piece by Dylan Jauslin from The Bottleneck blog from 2013 dedicated to Doug and his twin brother Jim.

At the New Zealand Beer Awards dinner, they dole-out trophies and medals to the brewing industry like candy at a kid’s birthday party. This year’s (2013’s) lolly-scramble was particularly gratifying, as I got to watch several friends and acquaintances receive awards, including our chums at Renaissance Brewing, who took out Champion Brewery (which I had actually predicted a few days earlier). Good stuff.

There was however, one rather odd moment in the evening, when they announced the winners of the Morton Coutts Award for Innovation. Now this is a hotly contested, but rather vaguely-defined award. The previous winners are Stu McKinlay, for inventing a new, never-before style of smoky-death-beer and Jim Pollitt, for erm, well… I’m not actually sure. Near as I can tell, he actually spent most of his time undoing (de-innovating?) the damage done by Morton Coutts and his Continuous Fermentation.

So, we were all on tenterhooks to hear who would take out this most prestigious award. And the winner is: Doug and Jim Banks (pictured above with awards host Te Radar: Doug is on the left).

Um, who? Everyone looked around confused as a pair of mature twin brothers got up from the DB Breweries table and wandered onstage looking for all the world like Tweedledee and Tweedledum in suits and ties. Ok, so who are these guys we asked? There was a brief thank you speech, which consisted of pretty much only the words “thank you,” and they left.  No further explanation. We were just left to speculate.

The evening continues and the ceremony takes a break. I slip out into the foyer to visit the bathrooms and who should be having their photo taken with their shiny new trophy? It’s Tweedledee and Tweedledum!

I spotted my chance and when the photos and interviews were over and they turned to go back into the hall, I slid between them and the doorway.

“Hi,” I said. “I just wanted to say congratulations on the award. I was wondering if you could tell me what you innovated?”

I got blank looks. And then they told me.

Now a warning: a lot of what they said was about brewing science. I’m neither a brewer nor a scientist, so I may get a few details wrong here. I tried doing a little research on the brothers and got in touch with the Brewers Guild to see if they could give me any more details. They linked me to an article on the brothers, which gives the basic facts, but no extra details. I also got in touch with DB to see if they could give me more info. They linked me to the Brewers Guild. Thanks DB.

I’m not a journalist, and I didn’t take notes, so I’m working from memory here, and I should point out I was a little drunk at the time. So apologies for any factual errors I make.

Mr Banks and Mr Banks have been working for DB for decades in technical and scientific capacities. They worked with Morton Coutts developing Continuous Fermentation. Coutts had invented this process, they said, and it fell them and their team to figure out how it worked and how it might be improved (there was more on this subject to come). Now I’ll be honest: I’m not keen on CF. I’ve never had a CF beer that I thought tasted any good. But hey, it’s pretty neat science, even if it makes bland beer.

What else had they worked on? Micro filtration. Ah! Now we’re on firmer footing, beer wise. They apparently helped develop a process that made sterile micro-filtration possible, which is now used in breweries around the world. Now again I’m not a huge fan of filtering beer, but it can be a useful tool for brewers trying to clarify and increase the shelf life of their beer. Certainly it’s nowhere near as bad as pasteurizing it. Neato.

At this point the conversation was jumping all over the place: low alcohol beer. They helped develop a process that makes it easier to brew low alcohol beers. Again not particularly something I’m interested in, but the science as they explained it to me was pretty sweet. Something about a permeable membrane.

Then we got on to what seemed to be their favourite subject: yeast. It seems a lot of their work centered on isolating yeast strains in the CF system. As I understand it, because CF breweries don’t have the same turnover of yeast cultures and entire-system clean-outs that comes with batch brewing, if an undesirable yeast strain gets into a CF system, it can cause a lot of problems. Now isolating yeast strains is something I’m very interested in. After all, this is what gives us all the different strains of yeast you find in your local homebrew shop. And er, Beard Beer.

Something I found very refreshing out the brothers is they made no bones about the fact that they worked for a corporate giant, but they did hasten to point out that they weren’t just about the mega-beer. They also help out the little guys when they need scientific assistance. Apparently, they helped sort out yeast issues at The Shakespeare, back in the day.

I chatted about yeast-strains and brewing processes with the Banks brothers for a while. At this stage however, I REALLY needed to pee, so I made my excuses, congratulated them again and went about my business. And back at the tables I told everyone about the two nice gentlemen scientists I met, the ceremony resumed, and that was that. Or so I thought.

The ceremony wrapped up in due-course and I was chatting to Dave the Beer Guy, when out of nowhere popped Mr Banks (I’m afraid I couldn’t tell you which one). There was something else, he said, that he forgot to mention. And then he started talking about, and really couldn’t make this stuff up: bioluminescent rabbits. It was something to do with yeast isolation again: giving rabbits different samples and using luminescent indicator when certain strains were present. Assuming no rabbits were harmed in the process, that’s a pretty cool piece of science.

And so the conversation rambled on again. Mr Banks told us about a design of theirs that’s used in one of the largest breweries in Europe and about a brewery he’d worked on in Africa that wastes very little water. We both agreed that’s what New Zealand breweries should be working towards, both for environmental and economic reasons.

In fact, if there was a consistent theme to our discussions it would be making brewing more efficient. And I’ll be honest: the motivation for this is mostly financial. People like the Banks brothers work for DB because they save DB money. They mean DB can more efficiently churn out their products. But I still salute Mr Banks and Mr Banks for their work because it has a roll-on benefit for all sectors of the industry. Efficiency (whilst maintaining quality) should be a goal of all breweries, no matter what scale.

Our pleasant chat with Mr Banks finally ended when we were ambushed by the video camera and we had do our darndest to look sober for an interview. Still, I thank the brothers Banks both for their work and for taking the time to explain it to me. I get the impression not many people ever ask them what they do or are very interested in the answer.

To Mr Banks and Mr Banks: Gentlemen Scientists of the Brewing Industry. 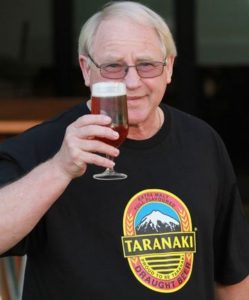