When a slightly off-beat idea went “nuts” Tim Ward knew he was on to a winner.

Ward, the brewer-owner of Lower Hutt’s Abandoned Brewery, has created a unique home brew competition in which brewers are given the same set of ingredients work with – in this case his New Zealand Pale Ale recipe.

The winner – to be announced at Beervana – will get a chance to brew their winning entry at Abandoned but more than that, this is a story of the industry coming together for a great cause.

“The original idea was to do a local competition and to engage with people in Hutt Valley,” Ward said.

“I wanted to organise an event that would allow people to meet each other and try beers as well as get some interest around the new cellar door we’ve opened.”

“It quickly became quite clear that those forums are populated by people from all over New Zealand – my phone started buzzing every two or three minutes. It was a Friday and I’d never experienced anything as crazy as that; I had about 150 people contact me for a competition that I thought might get 10 entrants.

“I quickly expanded it to 30, but I had a real problem saying no and eventually we made 38 packs.”

The packs were created with support from NZ Hops, Gladfield Malt and Fermentis who provided all the ingredients bar the water, while Ward supplied recipe.

The success of the local event prompted Ward to aim for a national event with 100 entrants, but he had to get his supplier-sponsors to agree.

“All of them immediately thought `this is a lot of fun’ and committed all the ingredients. Effectively, they’ve contributed to a 2300 litre brew.”

Ward has no qualms about sharing his recipe with 100 potential rivals and was inspired by a trip to Portland a few years ago when he saw that one of his “hero” breweries – Gigantic – had published all their recipes online.

“A lot of people in the industry are very guarded but I don’t see beer and brewing like that – if you’re able to clone somebody’s recipe you’ve still got to come up with a brand and all of the commercialisation around it.

“With a series of ingredients that are so simple yet so complicated in the manufacture process, there’s no risk. It’s just fun and a great leveller. It enables the inexperienced home brewer to get better information in order to make a good beer at home and puts the experienced home brewers into a place where they need to work hard to beat everybody else.”

Ward initially wanted a “beat the brewer” competition where the home brews would be assessed against his own pale ale, but has decided to whittle down the entries to a top-10 and then put them before a panel of judges to find the best.

Ward has been in hospitality for 26 years, dating back to a Vivian St music venue called Hole In Wall, where he poured beers like Gisborne Gold and Mike’s Mild. He is the co-owner of iconic Wellington music venue San Fran.

While he spent a few years “stuck in big brewery contracts”, he remained interested in craft beer.

“I watched the industry emerge rapidly and had enough interest to get keen on making something rather than just serving people. I just had a gut instinct and strong desire to start making something.”

He got his chance to take over a small, uncommissioned brewery located near the Avalon TV studios when its original owner struggled to get it up and running.

“Abandoned is a true to brand name – Darren, the original owner, had gone to Beervana and bought a 500-litre Braumeister and tried to brew on it and then abandoned it.

“I set about making it good.” 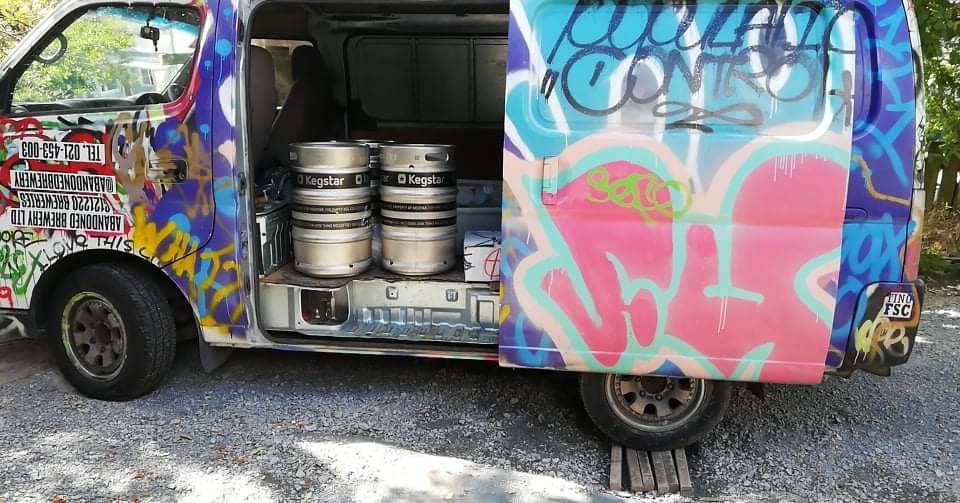 Engineer Chris Banks in Pukerua Bay did a lot of the remedial work on the system and Ward bought an old dairy vessel to convert to a mash tun to complement the Braumeister, which is designed as a single vessel brew system.

Ward’s maximum output is two brews a week for a total production of around 950-litres per week.

He briefly made a foray into packaged product, picking up a Highly Commended Top-100 award for his XPA at the New World Beer & Cider Awards last year.

But Covid-19 impacted that side of the business and Ward has returned to keg-only production with a focus on making new and interesting beers, which he sells through his cellar door.

“It’s been a really difficult six months, if I’m honest. But I’ve been really lucky in that with the music venue we’ve worked with such integrity, honesty and warmth we’ve been rewarded with amazing support from public and local authorities.

“That’s key for me in building a small business like Abandoned … this time has enabled me to work on a new plan for Abandoned that has a hyper-local focus, and a new product focus beyond smashable pale ales and lagers.”

The brewery has also picked up two international design awards – in Australia and Germany – for their gritty, graffiti-driven look.

Ward says the design walks a fine line between aspirational and being a bit too negative.

“There’s a darkness behind name and it does have a negative connotation, so to appropriate that and add humour as opposed to diving down that negative rabbit hole is really important.”

More about the author
← Core Competencies: in search of NZ's best core range beers The battle between Haze & Clear →