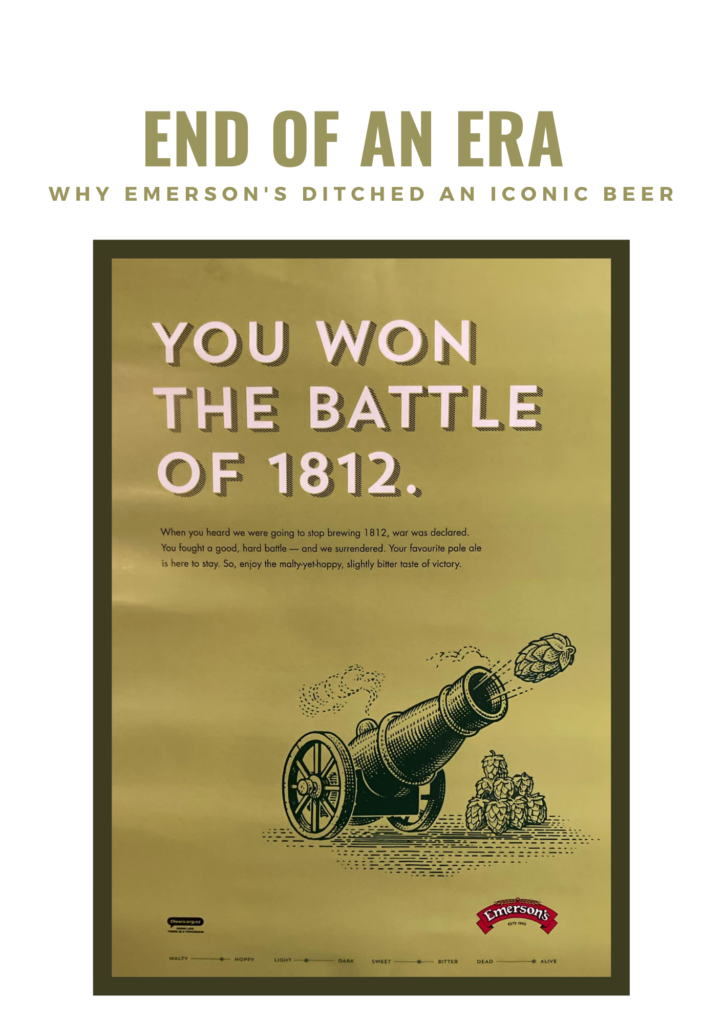 One of New Zealand’s longest-running craft beers was “retired” this year, only to be given a second lease on life thanks to the local community.

Emerson’s 1812 is as old as the craft beer movement in New Zealand, dating back almost three decades to when Emerson’s was founded in 1992.

Along with London Porter and Bookbinder, 1812 was one of the Emerson’s originals. While not quite as old as Mike’s Mild or Sunshine’s Gisborne Gold – which both date back to 1989 – that trio of Emerson’s beers are among the most enduring in the New Zealand craft landscape.

The beer was named after the last four digits of the original Emerson’s brewery telephone number – it has nothing to do with Tchaikovsky (nor Beethoven* for that matter, as this post originally and erroneously stated)! And like telecommunications, the beer has changed dramatically over the ensuing 28 years. Once a distinctively English-style pale ale – chewy malt and a rich orange marmalade character to the hops – 1812 has been tweaked more times than Cher.

As palates changed to leaner style pale ales, with less caramel malts and more American hops, so 1812 kept being refined and manipulated. What couldn’t be tweaked and refined, though, was the name.

Sales fell away and Emerson’s made the tough decision to cull a piece of history.

It’s been replaced by a beer known simply as Emerson’s Pale Ale, which comes in a tartan can that ties it into its Dunedin heritage.

“1812 was a bloody good beer – but it was more an old-fashioned style of pale ale,” says Greg Menzies, Emerson’s sales and marketing manager.

“It was still doing quite well on-premise but it was dropping out in retail – over the past two or three years sales were declining.

“We wanted something more modern and the new pale is a more hop-forward style made with American hops. It’s more hop-forward, more fruity and plays to New Zealanders’ love of hops.”

Menzies said it was also getting more difficult to tell the 1812 brand story.

“It didn’t have the relevance it used to have when people understood the name 1812 – it was getting harder to tell that story,” Menzies said.

“And we’ve had people think it’s an imported English beer.

The new Emerson’s Pale Ale (5 per cent ABV) is available in six-packs at a competitive price of  around $23 and Menzies said it’s going great guns – attesting to the market’s enduring love of both Emerson’s and Pale Ale as a style.

“Each week the sales of it keep going up, demand is there.”

Menzies said brewery founder Richard Emerson backed the decision to drop the beer, but was soon having second thoughts when a number of local bars protested the move.

We did have a bit of a backlash in the local community.

“Richard was all behind the idea of changing out 1812 even though it was one of his nearly-originals, but when we got a backlash he changed his tune and was saying “oh my god, oh my god!”

Albar and Portsider in Dunedin and Atlas in Queenstown all sell a lot of 1812 and they demanded Emerson’s continue producing it.

Emerson’s maintained a sense of humour about it, creating a poster conceding defeat in the “battle of 1812”.

The concession to the bars reads:

“When you heard we were going to stop brewing 1812 war was declared. You fought a good hard battle – and we surrendered. Your favourite pale ale is here to stay. So enjoy the malty-yet-hoppy, slightly bitter taste of victory.”

“We’ve listened to the customers and we’ll keep it on as a brewery-direct keg,” Menzies said.

It is also available in an Emerson’s mixed pack, probably until April.

*Although it must be noted that Richard Emerson and Beethoven do have one thing in common: both are/were deaf.

More about the author
← Capital Diary: Spring in My Step Heroes of the Zeroes: best No-alcohol beers →