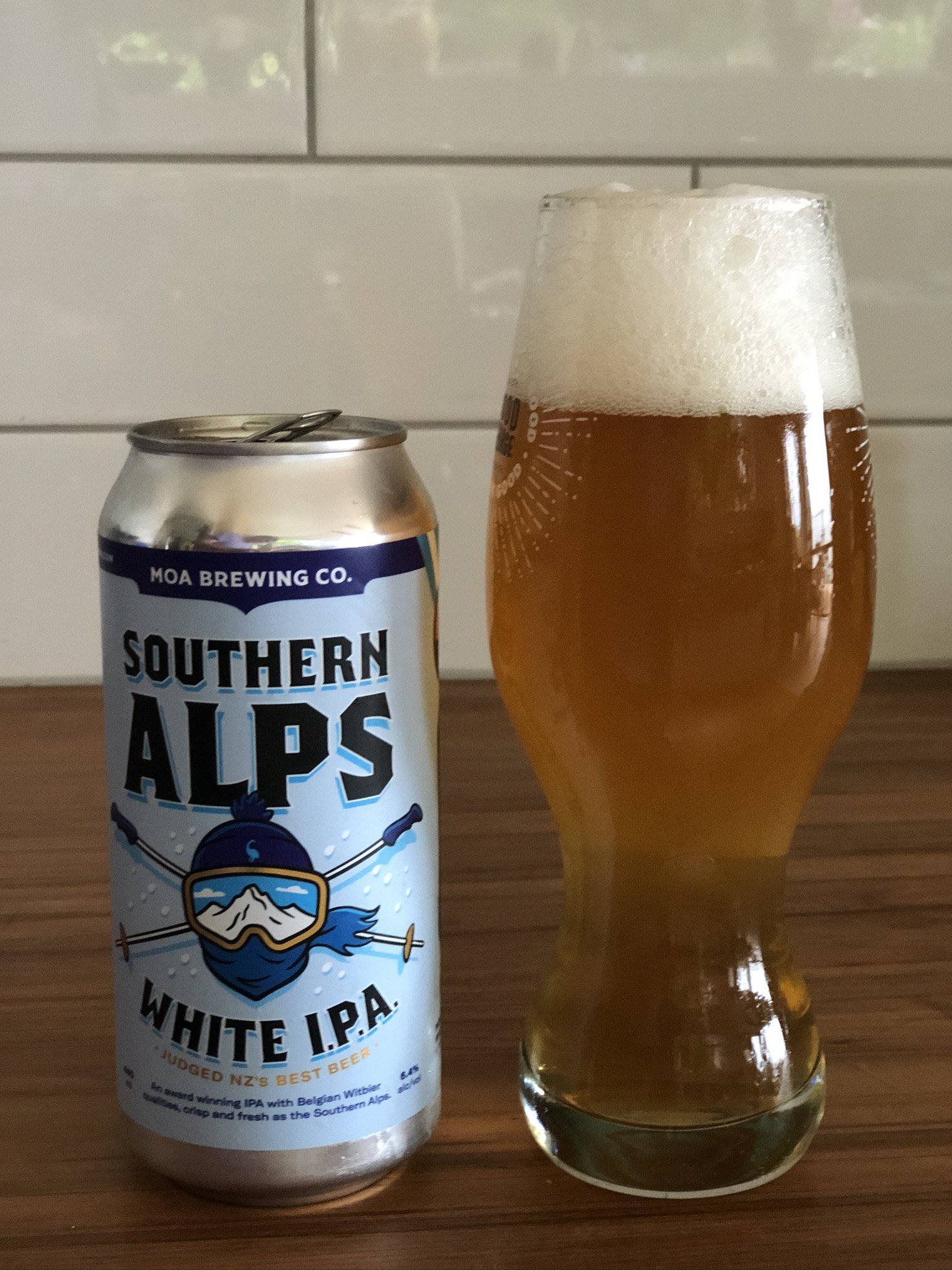 How can a beer go from being the best in New Zealand to one that’s pilloried on social media as “crap”?

The beer in question is Moa Southern Alps – a multi-award winning White IPA.

If you’re a member of the Facebook group, Saving The World With Couch Beers, you’ll have seen this for sure.

(Some background: the page set up by Andrew Childs of Behemoth during the first Covid-19 lockdown. The idea is simple: post pics and comments on what you’re drinking as a kind of distraction from the pandemic that was threatening to batter down our doors back in March-June.)

There are nearly 4000 members of this group and when you bring that many people together in one place there’s always going to be the odd disagreement. But the polarizing nature of the divisions created by Andy Jameson’s October 30 post made the American presidential election look like a romantic dance.

It started with the description of Southern Alps as “crap”, later qualifier that it was “sour”. Many backed his assessment. (Screenshot below as embedding Facebook posts is a massive drag these days!) 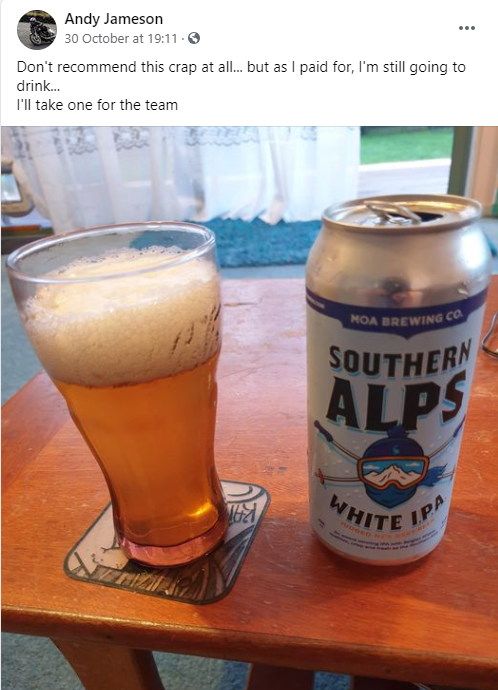 The thread soon diverted into a drinker versus brewer stand-off with Moa brewer David Nicholls calmly joining the conversation to answer a few questions. He found willing allies in North End’s Kieran Haslett-Moore, Emporium’s Paul Finney and McLeod’s Jason Bathgate, who all went in to bat for the beer.

There was a secondary excursion into the overall merits of Moa as a brewery and some errant sniping about glassware but on the whole it was good fun, willing banter with only a minimum of swearing.

What piqued my interest is the fact this beer is/was indisputably one of New Zealand’s best. I’ve always loved it and it has been a trophy winner at both the New World Beer & Cider Awards and the Brewers Guild Awards where it was crowned champion beer in 2018 – basically the best beer in show from around 1000 entries.

On the flip side, it can be quite an unusual drinking experience if you’re not sure what a White IPA is. And there were a few questions of that ilk in the forum.

The blend of Belgian Witbier – with the spicy phenolic yeast profile – and a zesty hoppiness creates a funky-citrus flavour experience that to me is amazing. See Bach Brewing’s Wit Sunday as another great example. But I can see how it might feel a little too brightly acidic if you weren’t expecting that flavour. But “sour”? I couldn’t understand that.

Naturally, like many others following the discussion, I had to try it for myself (I’m sure sales spiked in the first week of November). I’d not had a Southern Alps for more than year and never from a can.

So, imagine my surprise when I took my first sip and found it to be … a little sour.

Not hugely, outright, sour but there was definitely a pronounced lemon on lemongrass note – a real acidity.

This was not the beer I remembered. I was starting to see what Andy meant.

Yet underneath the acid lick, the “old” Southern Alps was still there. The flavour profile and aroma were the same although it lacked some of the creamier mouthfeel I recalled from the past.

Confused, I wondered if it was me or if the recipe that had changed.  Or maybe this was just a bad batch where something had gone wrong?

When in doubt, go to the source: I called Dave Nicholls, who took all the criticism in great form.

“It was a classic,” he said of the post, laughing.

He confirmed the recipe was unchanged “same yeast, same malt, same hops” and that the beer was brewed and canned at Moa’s small Blenheim plant, not at B Studio where there have been some previous problems with “sour” beers thanks to a cross-contamination issue.

He believes the difference in perceived acidity is down to moving the beer from bottle to a can, where it is force carbonated rather than bottle-conditioned.

“In the can it changes the whole mouthfeel and the carbonation will feel different,” Nicholls explains. “Bottle-conditioned beers are softer and rounder compared with the force carbonated beers.”

Nicholls made contact with the original poster, Jameson, and cross-checked the batch number (it was brewed in August) with his retention samples.

“There is some age and oxidation there. I suspect seaming issues,” he said, referring to the process of putting a lid on the can.

He noted that bottling beer “is really easy” compared with canning.

“With bottling you can see what the foam is doing and see the fill level – and putting a crown on is a simple business. With a can it’s a hell of a lot more complex. You can’t see the foam level, you have to do it by weight but that’s not always accurate. And seaming is a complex operation compared to putting crowns on.”

Nicholls, who is soon to leave Moa to set up his own brewery in partnership with Blenheim brewery Ant Moore, said his preference was to keep Southern Alps as a bottle-conditioned beer.

“It would be a brave man to can condition beers – I’ve been working it but your carbonation needs to be spot on as the tolerance is nowhere near the same as a bottle.

“I wouldn’t put St Joseph’s or Imperial Stout into cans – it wouldn’t work and it’s not appropriate for the beer styles.

“My preference would be to keep Southern Alps in bottle, but it’s a commercial decision.”