The secret volume in your beer glass

By Michael M
Hoppiness at home

Have you ever felt like a cave man or cave woman when ordering a beer in a bar? For me it is not the environment or the people in the establishment that makes me feel I am going back in time — it is more the communication with the bar tender. After ordering a certain beer, I am often confronted with a questions: Large or small? Standard or half? Pint or glass? Handle?

New Zealand adopted the metric system almost 50 years ago. Wherever I go in New Zealand — supermarket, dairy, bottle store or pharmacy — liquids like milk, soft drinks, shampoos, perfume, wine, and beer are sold in millilitres. And yet the best we can come up with in a bar is asking ‘standard or half’?

The closest question to a precise volume is: pint or half-pint? But then we get to the old mystery: What is a pint? I will not only briefly touch on this, but in the UK a pint would equate to 568ml in the US this is likely be equivalent to 473ml but in New Zealand a pint is not a defined measure, although pints of milk used to be 600ml. My experience is that pints of beer in New Zealand can vary anywhere between 400ml and 570ml. Bar staff offering me a pint does not really help me on the deeper question of what volume to expect.

I noticed that often — when settling for a ‘pint’ — the glassware has “425ml” engraved at the bottom. So, for the sake of this article, let us assume 425ml is a NZ pint.

That opens the next can of worms: Another bar I went to sells beer in a 425ml ‘pint’ glass but also offers ‘half-pints’. The half pint glass does not have 212.5ml engraved but rather 285ml. The 285ml half pint is obviously a rounded equivalent of a UK 568ml pint.

Brace yourself — it is going to get more confusing.

A pint of beer in a bar (based on our 425ml assumption) should mean you get about 425ml of the liquid refreshment. Well, do you?

I did a little experiment at home. I cracked open a couple of cans of beer from the supermarket (440ml and 330ml sizes). When I poured a 330ml in to one of my 425ml Kiwi pint glasses, the beer (with a nicely poured head) almost filled the glass. I admit that ‘almost’ is in the eye of the beholder but it was not far off. I then poured the 440ml can in to the Kiwi pint glass, again with a head, and the actual volume of liquid in the glass was about 375ml.

The full 425ml volume was only reached when the content was at the point of overflowing aka the ‘Iceman pour’. This means that a Kiwi pint of properly poured beer (with head) has the potential of leaving the punter short-changed on actual liquid volume. Of course the “head” is part of the beer experience and as the accompanying article on the history of beer serves shows, that can be a point of disagreement too.

There are two obvious solutions to the “How much beer is in my glass?” question — neither of which on its own is desirable for either the punters or the bar owners:

But there are other problems inherent with a fill-line: some beer styles, for instance gose, don’t have a head at all so a glass of gose poured to the fill line would look like the tide is out. Conversely a hefeweizen or nitro stout has a big fluffy head and you wouldn’t want to constrain that so you’d be below the desired fill-line.  And then you get into the question of different glassware for different styles. Some bars might do this but it’s an expensive exercise and not ideal for publicans.

And creating new, standardised glassware (by volume) across the hospitality industry would be a costly exercise. As I understand it, New Zealand relies heavily on imported glassware so making our own and getting industry standards would be difficult.

So, what’s the best option?

Maybe bars need to simply start advertising exactly what size glasses they serve (in millilitres) so punters don’t have to guess when they order. There’s also some host responsibility here in terms of standard drinks being consumed.

A clear indication of serve size, ABV, price and, ideally, standard drinks would be welcome. This kind of transparency should be in everyone’s interest.  And while I’m here, there’s a question of pricing for smaller pour sizes. Invariably these are relatively more expensive than a larger pour sizes. Encouraging responsible drinking should mean making smaller pour sizes more attractive.

I like drinking in a social environment like bars, but the (possibly unintentional) secrecy on volumes poured is not helping. Even the beer and pub-loving me fills take away flagons and growlers more often (for budget reasons) and I have increased the number of craft beers purchased in bottles and cans from the supermarket. At least here I can be sure that the 440ml can or 330ml bottles contain the advertised and charged volumes.

Michael Donaldson looks at the history of froth and bother over pour sizes.

The price of beer in New Zealand was historically the subject of huge debate, most notably in the wake of Arnold Nordmeyer’s Black Budget of 1958.

Nordmeyer, a teetotaller and a former Presbyterian minister, hiked the tax on beer sparking off a battle between brewers, the media and the drinker.

In the wacky world of alcohol politics of the time, the Government argued it had not made beer more expensive for the person in the pub because it was only increasing the tax paid by the brewers. The brewers couldn’t pass on that cost because the price of beer was fixed by the Price Tribunal which had to be persuaded to change it.

After hard lobbying by the brewers, the Price Tribunal set a series of new maximum beer prices based on glass volume. It was 8 cents for 8.5oz (250ml) and a penny per ounce (16ml) after that, which meant a 9.5oz glass would cost 9 cents. It was the first time price had been set so precisely by volume – until then there had been a minimum price and if you wanted a smaller glass, you still paid the minimum price.

This created a microscopic focus on the size of glassware. The ensuing battle was not helped by the Licensed Victuallers Association (publicans), who said that because there was no such thing as a 9.5oz glass, publicans should charge 9 cents for the glasses they did have, which were 9oz. And it just so happened that what the industry touted as a 9oz glass, actually contained only 8.5oz of beer. You honestly couldn’t make this stuff up if you were writing satire on 1950s drinking. 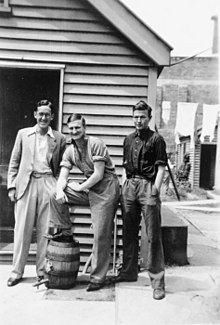 How did we learn the pubs’ glasses were undersized? Drink-loving Wellington poet Denis Glover, pictured in the middle, carried out a publicity stunt whereby he poured his so-called 9 oz beer, supposedly worth 9 cents, into a properly marked beaker and found it was only 8.5oz and therefore worth 8 cents. Glover made the point he was being robbed of a penny every time he had a drink. This kerfuffle kicked off in July 1958 and punters were so outraged that by August, beer consumption was down 40 per cent and there were reports of layoffs at breweries. There was also a rise in the number of Kiwis attempting to homebrew.

Yet the publicans didn’t back down, even in the face of being dragged to court on charges of overpricing. Instead, they asked for a judicial review of the whole sorry saga. That was declined after a judge determined the brewing industry was actually making more profit than ever – even accounting for the tax hike.

That put the onus back on the publicans, who said they would try as hard as possible to sell “eight-penny beer” – their method being to fill the 8.5 oz glass short of the rim to justify charging 8 cents for it. And so another fight broke out, this time over “short-pouring”.

The publicans then discovered that if they stepped up the pressure through the taps, they could create a bigger head to disguise the short-pour.

Born in Germany Michael's two passions are football and beer. After growing up drinking Pils and Kölsch, Michael moved to New Zealand in 2007. Here he had to renounce his…