Witches and magic: women reclaiming their rightful place in beer

By Charlotte Feehan
Hoppiness at home
“So, you do drink beer then…?”

As a woman in the beer industry, it’s a question I’ve been asked more times than I can remember. Bars, beer festivals, that friend’s party where there’s that guy that’s a mate of your mate’s boyfriend that bullsh*t social conventions dictate you have to be polite to, and those random punters in your own brewery….

…. I’m gonna be honest, it’s getting to that ‘Ya gotta laugh or you’ll cry’ stage. It seems innocuous, but if you’re a man in the beer industry and you’ve ever been asked this question, even once, could you put your hand up, please?

Yea. There it is.

So why, why do we continue to ask women in beer if they even drink the stuff? I can tell you right now they aren’t here for the great pay, and easy-going hours.

Despite beverages being inherently genderless, as a society we are slowly coming back around to the idea that beer is for everyone. Beer has been seen as an “everyman’s drink” and traditionally masculine for much of living history (that weird bold font is deliberate). But it’s 2021, and beer is a dynamic, fast-growing industry that rewards creativity without losing its basis in science.

OK, enough buzz words. But, as the beer industry grows, and society catches up we are seeing greater diversity than ever within the beer ranks. Obviously having more diversity in the industry is great, stats show that it is good for industry (any industry). So why are women still having to defend our desire (and right) to be here, especially when historically beer and brewing was the domain of women, it’s just outside the realm of living memory. Women aren’t entering the man’s world of beer. We are reclaiming it!

The irony of women being asked about their “new-found” interest in beer is twofold; first, beer was a primary source of clean drinking water in the days before water treatment (i.e. prior to 150 years ago) and therefore drunk by everyone all day. Water was dangerous to drink, waterborne disease was rampant and despite not understanding why, people knew that drinking beer saved them from illness. But more importantly outside of monasteries, women were the primary brewers of beer for much of history.

Beer was a necessity of life, a domestic chore (and a laborious one at that), and as such it was relegated to the wives to ensure supply. The alewives of old would make beer out of whatever was close at hand to ensure their families were cared for. They produced a variety of beers for different purposes, special occasion beers in addition to table beer for everyday consumption.

In the same vein that “for most of history, Anonymous was a woman” (Virginia Woolf) large parts of beer history have long been disregarded or forgotten simply because they are so deeply connected with women. In the millennia preceding industrialisation unmarried women were even persecuted for the selling of their excess beer. These widows, spinsters, and *cough* queers *cough*, were financially independent from men and this simply wouldn’t do.

The hallmarks of their persecution have echoed through the ages. Historians see clear similarities between the alewives’ tools of the trade and illustrations selected for anti-witch propaganda. Bubbling cauldrons, broomsticks (to hang outside the door to indicate the availability of ale), cats (to chase away mice), and pointy hats (to be seen above the crowd in the marketplace) endure today. 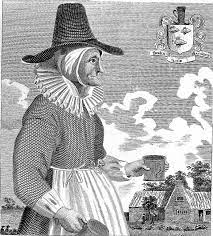 I mean I get it, even with all of our science and reason, who among us doesn’t believe beer isn’t kinda magic. I’m not about to burn a witch over it. But I do see how the church convinced the uneducated masses that these women were to be feared not celebrated. Especially when the church was looking to sell their own beer to those same masses.

It was industrialisation that saw the shift of brewing from “women’s work” to the domain of men. As soon as prestige and business are involved, work makes this shift from the domestic sphere to the commercial, a sphere which has been exclusive to men until very recently. Industrialisation physically disconnected women from their alewife lineage at the same time as the process of industrial brewing saw the loss of connection to the art and magic of beer-making for all beer makers.

The industrialisation cycle is brutal. Improvement in technologies and increased mechanisation that began in the 1700s allowed for the efficiencies and automation driven by early capitalism’s financial necessities. In the mid-1800s we saw the full-scale of the Industrial Revolution across all industries. But in the early 1800s beer became BIG business. Cities like London were flooded with thirsty labourers hoping to make their fortunes, and the rise in scale of London’s breweries continued until breweries were only exceeded by Banks in their need for capital investment.

In regard to beer, these improvements in technology allowed for larger production volumes and greater efficiencies. Access to raw ingredients was improved, as well as machinery and technology to reduce manual labour and improve in product consistency.  But all of these “improvements” and quality control measures that removed any inconsistencies in the product also removed the soul of beer. It wasn’t until the 1970s that the ‘craft’ in brewing was rediscovered.

The craft beer revolution has reignited a long dormant aspect of beer, the breadth of styles available and variety within each style category now, is unseen at any other point in history. It seems unbelievable when considering the beer options even 20 years ago. We have rediscovered the magic in beer. To that end it seems fitting that we are seeing the corresponding growth in diversity in the beer industry. The world of beer isn’t some new unplumbed depth for women to explore, this was once our domain and we are simply reclaiming our place in this world. Considering there are few, if any beverages that humans have relied on more heavily for health in history, reclaiming beer as truly for EVERYONE seems a fitting full circle milestone to work toward. In this respect we still have work to do.

I’ve been a commercial brewer for five years. In that time, I’ve worked in breweries of different sizes, in different countries, I’ve put almost anything you can think of in beer, and in many instances, I’ve been the first woman on production teams. That’s not to say that I’ve felt unwelcome in my work environments, I have been fortunate enough to work with great men but seeing others that look like me join the ranks, others who have had similar life experiences to mine, deepens the connection that I have for my job and the industry that I love. It matters. It matters to me and it matters to those in the wings, looking at beer as a possibility. You can’t be who you can’t see.

The reality is that we are all here because we love it. We love beer, and we love the industry as a whole. For me, beer sits at an intersection of so many of my interests. The stimulation of the work itself, the engagement with friends and strangers alike, the extensive history, and connection to my own family history. I love it all. Being a queer woman, and a brewer, I have never felt more in touch with my alewife ancestors – read, witches – than when I’m furiously stirring my wort into a whirlpool with a paddle on my tiny 500L kit.

Above all though, yes! I love drinking the stuff. So, if you needed a sign to stop asking “So, you do drink beer then?”, this is it.

Because the next time someone asks me; my reply will be: “Gross! No, can’t stand the stuff. I’m here for the great hours and insane pay”. I think I’d find it amusing to see the response. Because ya’ know, if you don’t laugh, you’ll just cry.

Charlotte Feehan is the head brewer at Abandoned Brewery and has BA in anthropology and criminology.