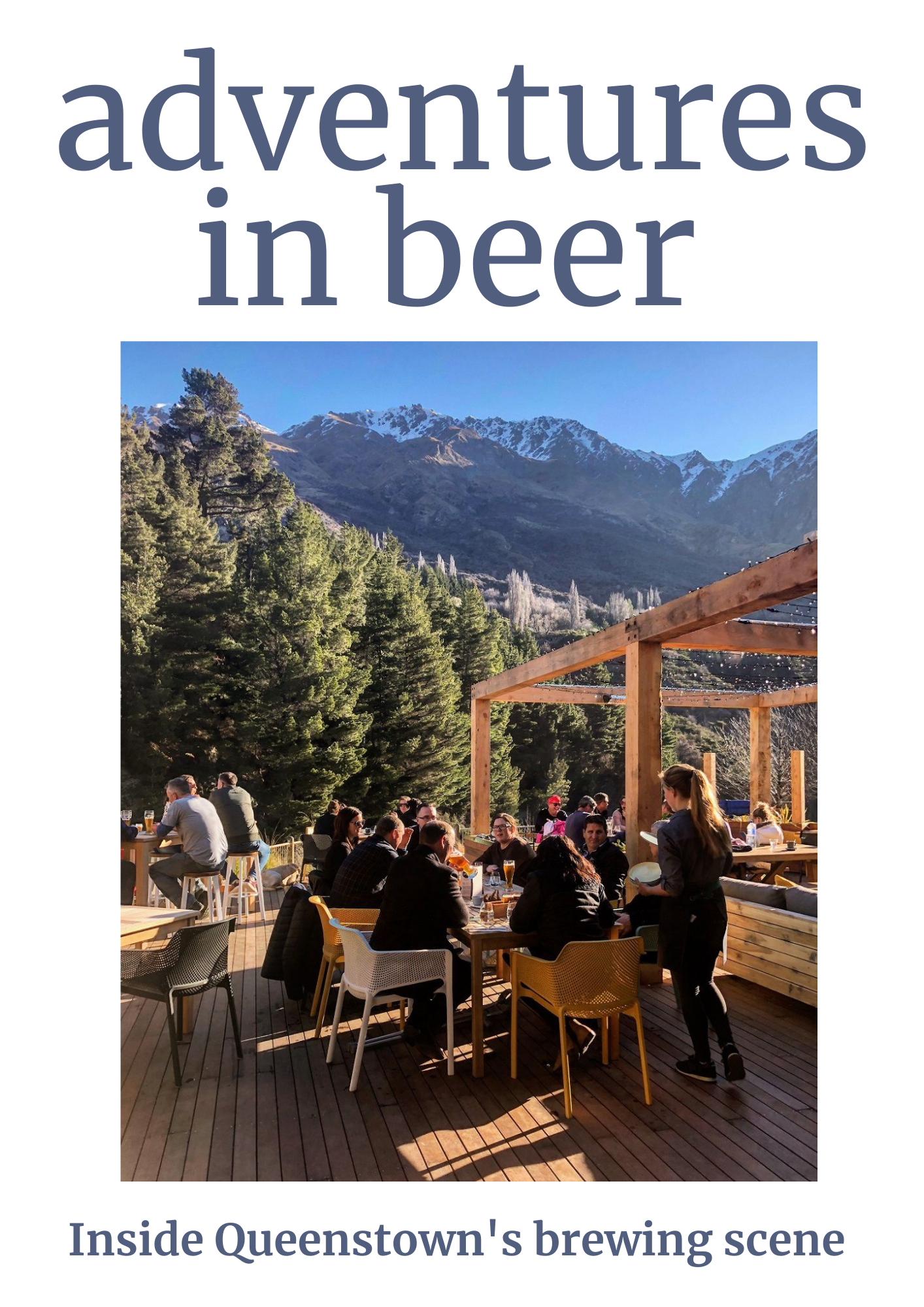 Adventure sports, the great outdoors and craft beer. It’s a winning combination from Colorado to Canada, and across the Tasman in Bright and Mt Buller in Victoria’s High Country. And while New Zealand’s borders remain closed, Queenstown’s exciting beer scene is providing a fine alternative to brut IPAs in Boulder or wheat beers in Whistler.

Helmed by business partners Eliott Menzies and Eddie Gapper, Altitude Brewing is the biggest of the southern region’s four craft breweries, and their raffish taproom on the shores of Lake Wakatipu is the first stop on a hoppy afternoon journey with Queenstown Beer Tours.

Courtesy of Altitude’s occasional distribution across The Beer Spot network around Auckland, I’ve tried core beers like the Mischievous Kea IPA and Powder Day Pilsner before, so I focus my attention on a tasting flight of one-offs and seasonals.

It may only be a few minutes after noon, but the American Breakfast stout – part of Altitude’s Expedition Series – showcases cinnamon and coffee as an entirely legitimate 7.5 per cent option for a liquid brunch, while there’s a refreshing creaminess from the Jam Session passionfruit and guava sour. Altitude’s entry in the market of ever-changing hazy releases is their new Cloud Cover series, and the 6.8% Anzac-US hop combination of Galaxy, Waimea and Mosaic makes Cirrus a balanced and juicy brew.

Stop two with the chatty and entertaining Lewis is at Cargo at Gantley’s – the latest beer-focused incarnation of one of the region’s most historic pubs. First opened as the Pack Horse Hotel in the 1870s, and then operated as the Sportsman’s Arms by Irishman Patrick Gantley in the 1890s, the schist stone building now serves up beers from Cargo Brewery. On a sunny Sunday afternoon, live music and a few friendly dogs conspire to boost the family-friendly ambience, and the Canadian head brewer, Jordan Wong, steers us through a concise beer and food matching session.

Most of the four brews run at a sessionable ABV of 4-6 per cent, with a lager, pale ale, IPA and porter teamed respectively with olives and bruschetta, arancini, Korean chicken, and a sticky chocolate brownie. Standout brews include the 6.1 per cent IPA with spicy and citrus notes from German hops (including Hallertau Blanc and Mandarina) – part of the brewery’s Lost Cargo range which harnesses different worldwide hops – and the coffee and chocolate hints of the porter, awarded a gold medal at the 2019 Brewers Guild awards.

Also on tap is an intriguing dry-hopped sour; it’s super-refreshing at just 3.7 per cent, and part of Cargo’s Brewer’s Batch series crafted at Waitiri Creek in the Gibbston Valley. Arrayed around a restored 19th-century church, Cargo’s original location in the shadow of Mt Rosa near the Kawarau River may well be New Zealand’s most scenic beer garden. Wood-fired pizza and occasional summer gigs – including big names like the Black Seeds, Ben Harper, and Fat Boy Slim – make it an essential diversion on the meandering road from Queenstown to Cromwell, and on January 16th 2021 there’ll be drum and bass from Christchurch’s Shapeshifter. In the heart of Central Otago wine country, Cargo are even having a crack at growing hops, with 100 bines planted at Waitiri Creek to be used for fresh hop brews. 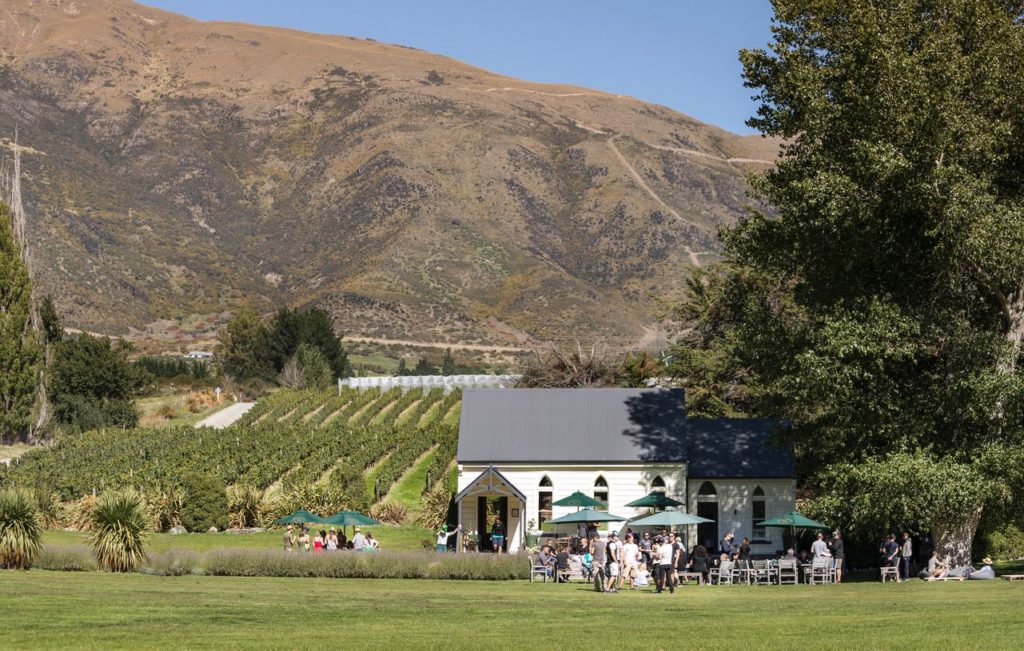 Indie favourites The Dandy Warhols provide a different soundtrack of choice as our tour arrives at Searchlight Brewery in a light industrial park on the outskirts of Queenstown. After Cargo at Gantley’s, the views are definitely limited, but there’s still an easy-going ambience. Trestle tables are crammed with local beer fans, and a friendly golden retriever mooches around my legs as I try a few Searchlight brews.

Originally from Jindabyne in Australia’s Snowy Mountains, Lewis Gaskin launched Searchlight in 2018. A few years on, he’s both a savvy observer of pop culture and a versatile and creative brewer. Across 18 taps, there’s the hoppy hit of Searchlight’s Frank Zapa APA, the banging 7.2 per cent Iggy Hop IPA, and the comforting creaminess of the Ena Sharples Milk Stout. Besides having good taste in music, Lewis is apparently also a fan of the long-running UK soap opera Coronation Street.

Their huge range of styles includes a bone-dry saison and a sessionable 4.1 per cent hazy brewed with Norwegian Kveik yeast, while Augustus Gloop is a refreshing blueberry and basil sour, harnessing flavours suggested by the winning team from Searchlight’s regular Sunday night trivia competition. Factor in the tacos, dumplings and potato skins dispensed from an onsite food caravan, and Searchlight would quickly become a favourite if I lived down south.

A familiar canine face greets me the following afternoon at Canyon Brewing’s riverside location near the Shotover bridge. Utah the golden retriever is named after the US adventures of Canyon’s Mitch Turner, and along with brewer Kit Clinton-Baker, we try a few beers recently enjoyed at the Dunedin craft beer festival. Crafted as a collab with Wanaka’s Rhyme x Reason, Here’s Jonny is a refreshing 3.6 per cent hazy sour while the punchier 6.4 per cent Cardrona Hazy IPA was brewed for the 40th anniversary of the nearby Cardrona ski field, which is also owned by Canyon’s parent company, Real Journeys. It’s an association which also sees Canyon’s beers available at Treble Cone near Wanaka, on the TSS Earnslaw steamship on Lake Wakatipu, and Fiordland cruising experiences further south on Milford Sound and Doubtful Sound.

Canyon’s sprawling deck is popular with locals living in nearby Arthur’s Peak, and tourists reliving their experiences on the Shotover Jet or white water rafting with Go Orange, both also part of Real Journeys. It’s a brilliant place for beer and pizza, so if you get down there this summer, say g’day to Utah for me.