By Brett Atkinson
Hoppiness at home

With four craft breweries and a resident population of less than 9000, the Southern Lakes town of Wanaka makes a good argument for having the most taprooms per capita in New Zealand.

Even adding in the fast-growing nearby regions of Albert Town and Lake Hawea, there’s still only 11,000 folk lucky enough to live amid some of the country’s most spectacular lake and mountain scenery.

There’s a solid case that Wanaka’s role in the development of craft beer in New Zealand is sometimes overlooked.

Wanaka Beerworks, the region’s pioneering brewery, was launched in 1998. Back then their Brewski Bohemian pilsner was as much a revelation to me as other gateway brews like Emerson’s Bookbinder and Cock & Bull’s Monks Habit. I still have pleasantly hazy – in the original meaning of the word – memories of a post-conference marketing shindig in Arrowtown where the zesty Brewski was offered as an alternative to Speight’s and Steinlager.

Launched by “American Dave” Gillies in 1998 before being sold to “Belgian Dave” De Vylder in 2011, Wanaka Beerworks is now onto its fourth set of owners with Wanaka hospitality entrepreneurs Joel Le Breton and Julian Field taking over in August 2020. Their other Wanaka interests include Fitzpatrick’s Irish Pub, Woody’s Sports Bar and Rove Bar & Eatery, all conveniently-located places to try both the Wanaka Beerworks range and their Jabberwocky sub-brand.

The Kai Whaka Pai lakefront cafe has also been serving draught Brewski for a couple of decades, and beers from other Wanaka breweries are usually on tap there and at a surprising number of other local cafes and restaurants.

Catching up with Joel at the brewery’s out of town location adjacent to Wanaka Airport and the  National Transport and Toy Museum, I’m steered through a mini-tasting session of current beers. Brewski’s still their No 1 seller, and while two decades of drinking other beers may have modified my palate, there’s enough grassy zing to momentarily resurrect a big night in Arrowtown back in 2002.

Also on tap are Beerworks’ Treble Cone wheat beer and Grazin’ on the Haze, a quaffable and juicy hazy IPA made with all New Zealand hops. Aged in oak barrels are 750ml bottles of Solera, a blended-vintage brew combining Jabberwocky Brown Ale and Pinot Noir juice from the nearby Central Otago wine region. Outside, there’s more combining of old and new with Wanaka Beerworks’ fire-engine red Dodge pickup, handily equipped with beer taps in the back, and a popular addition to events and markets around the region.

Back in town, two more recently-opened breweries are conspiring to make Wanaka’s Gordon Rd an essential destination for travelling beer fans. Opened in mid-2017 by Aussie-Kiwi couple Jess Wolfgang and Simon Ross, Rhyme X Reason’s rustic taproom ticks all the boxes. Shared wooden tables are especially popular with locals after work and on weekends. There’s an impressive range of cool merchandise, and an ongoing schedule of food trucks partners the brewery’s core range and regular seasonals. 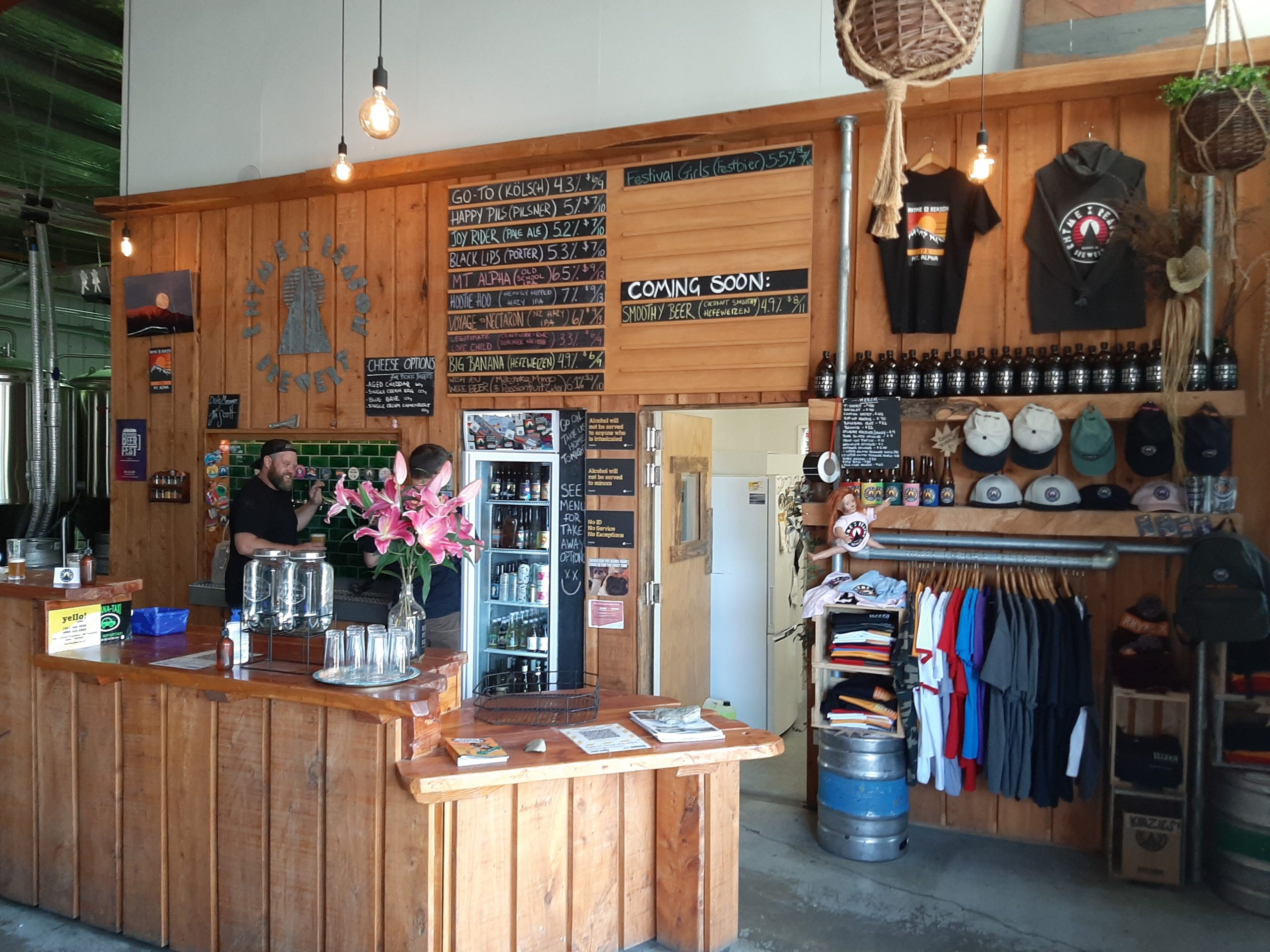 With a brew team who have experience at the likes Modern Times in California and Hunter Brewing Co in NSW, both innovation and excellence feature on the  taplist. From Rhyme X Reason’s core range, Mt Alpha is a no-nonsense IPA packed with citrus and stonefruit, while the elegant and delicate Go-To Kölsch may well be New Zealand’s best example of Cologne’s signature beer style. Voyage to Nectaron is still my pick as the best Kiwi brew to harness the “Hop Formerly Known As Hort 4337”, but my Beer of the Day award goes to Legitimate Love Child, a super-refreshing 3.3% Berliner Weisse brewed as a collab with Oamaru’s Craftwork, who own a fermenter in Rhyme X Reason’s brewhouse.

A short stroll along Gordon Rd past a crossfit gym and aluminum joinery workshop reveals Ground Up Brewing, launched in 2015 by climbing and mountaineering fans Oli Boyes and Julian Mark Webster.  They reckon they brewed around 40 different recipes per year in the early days, and there’s still a huge diversity of styles on the 22 taps at their just-launched bar and taproom. 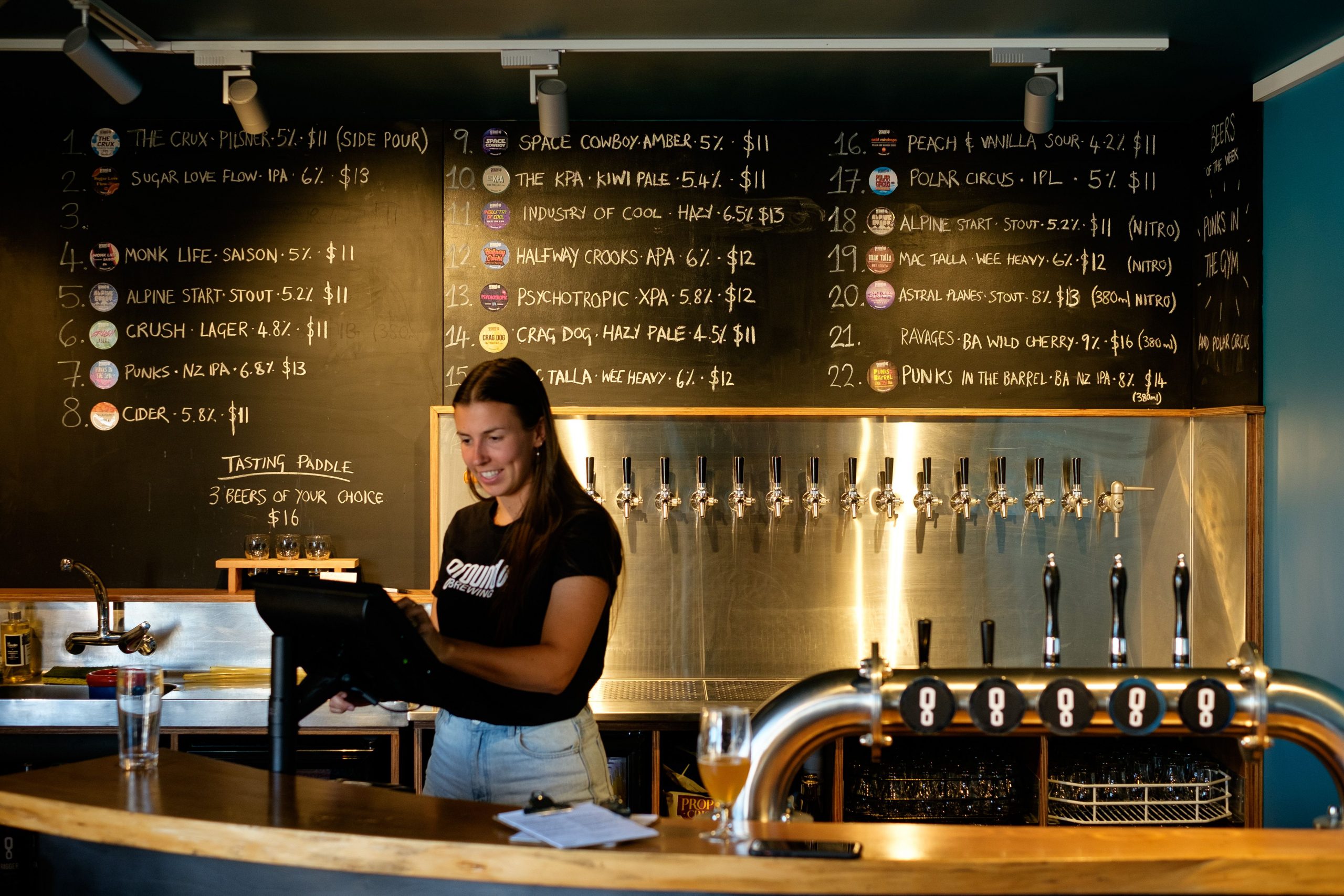 The Crux Pilsner is served off a traditional Czech-style side-pour tap, while the Alpine Start and Astral Planes stouts both arrive following a smooth and creamy nitro pour.

Inspired by Oli’s time studying at the University of Aberdeen, Ground Up’s peat-smoked Mac Walla Wee Heavy Scotch ale is also served nitro-style, and with a salted pineapple sour, a barrel-aged NZ IPA, and a traditional saison also available, it’s a damn impressive taplist for a smaller brewery.  Obviously the timber and stainless steel setup they resurrected and restored from an earlier role at the original Mac’s Brewery is being well-used.  A couple of comfy couches also look to be a few decades old.

With Wanaka food truck Burrito Craft onsite from Friday to Sunday, Ground Up is a relaxing spot on a weekend.  Occasional weekend afternoon gigs are advertised on the brewery’s Facebook page.

After being contract-brewed in Christchurch and Invercargill since 2015, b.effect’s beers are now all brewed at their b.social location in the Anderson Heights area of Wanaka. Formerly a mechanics workshop, the site is now a sleek and modern combination of brewery and taproom, with a sunny recently expanded beer garden and plenty of room for local events. Co-owner James Hay guides me through a tasting with most of the sessionable beers coming in under 6% ABV. 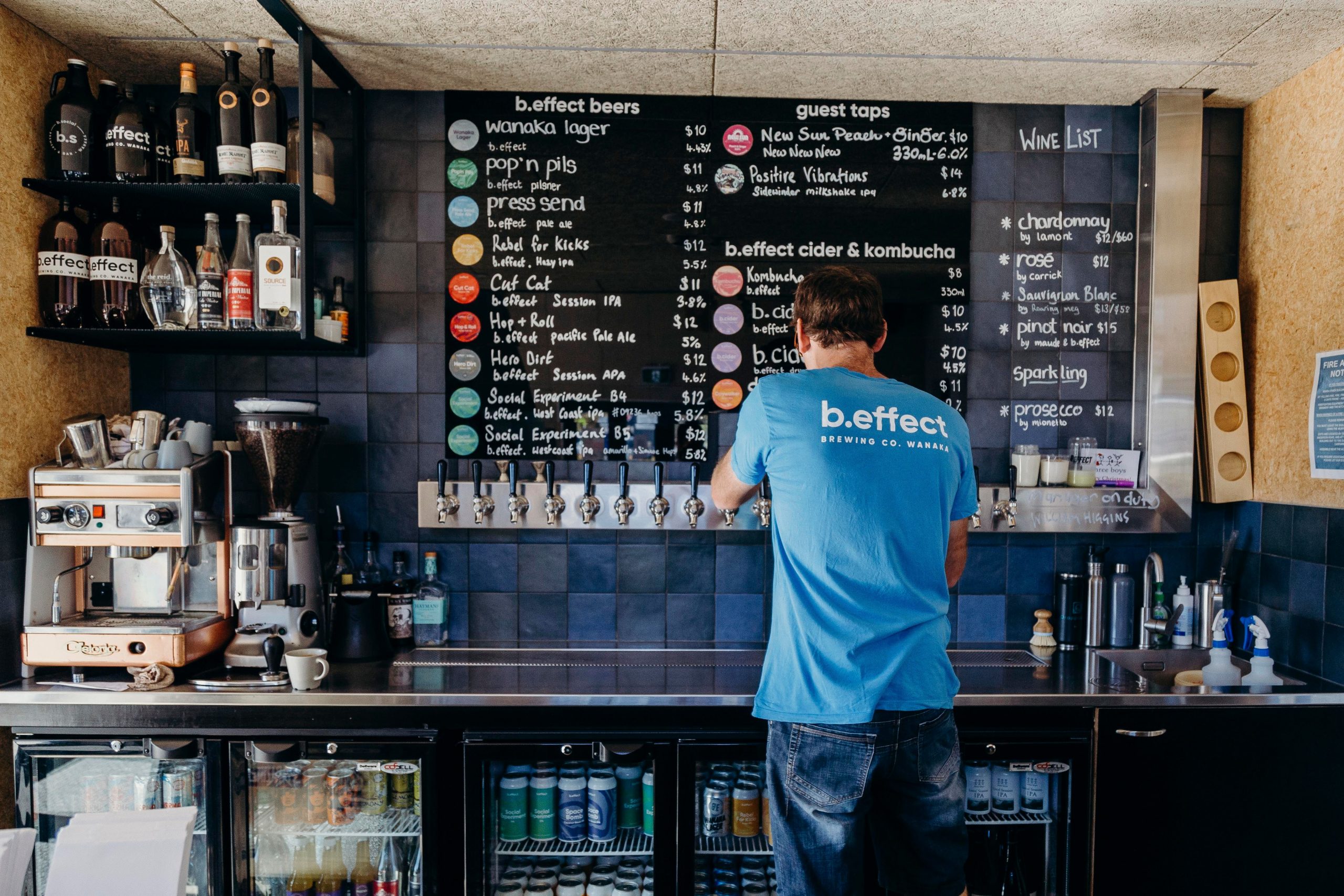 Rebel for Kicks hazy IPA notes come from citrusy Sultana and Lotus hops, while the Social Experiment series focuses on West Coast IPAs using different hop combinations. With a traditional US hop combo of Simcoe and Amarillo, Social Experiment B5 is my favourite, while the Space Bomb Coconut Black IPA is a spin on a Cascadian Dark Ale. It’s another reminder of an interesting style often overlooked by Kiwi brewers.

Factor in good bar snacks and burgers, and a decent range of non-beer options including cider, kombucha and alcoholic ginger beer, and b.social’s reputation as a popular, community-focused destination is ensured. All this, and some of New Zealand’s classiest and most cohesive craft beer branding.

During his work for Lonely Planet and other publishers, travel and food writer Brett Atkinson always takes the opportunity to explore a destination's craft beer scene. His favourite beer cities…