I planned my visit to Emporium around an unrelated event in Waipara, shooting up to Kaikoura a day early to check out the new bar.  It was January 22, and arriving after midday I had about enough time to park up and reach for the sunblock before my phone was buzzing…

The Covid red-restriction boogaloo was back and it was time, once again, to shut up and dance.  Events were going down like dominos (including Emporium’s own Kegkoura festival) and after a few incredibly bleak phone calls it was, manifestly, time for a beer.

Dejected as I was, I couldn’t help but smile as I found Emporium’s location.  A long, unsealed driveway, a scuffed-up caravan turned kitchen, and a cat sleeping on the cool concrete in front of the wide open, welcoming doors of the bar.  This was already my kind of place. 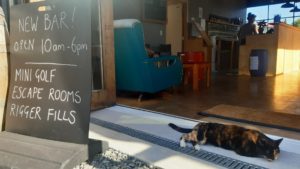 The coastal North Canterbury town of Kaikoura has historically been a destination for all kinds of seaside action — famous for whale watching, diving and world class seafood.  It even had a winery for a brief period.  But local craft beer?  Not so much.

That was until Paul and Laura Finney made their exodus from Christchurch and founded Emporium Brewery in 2016, finally putting the township on the New Zealand beer map.  Fast forward to the present where they’ve just opened the doors to a new brew bar, and the future for craft beer in Kaikoura is looking bright.  Easy to forget now, that those intervening years spanned some of the most challenging times for any region in recent history. 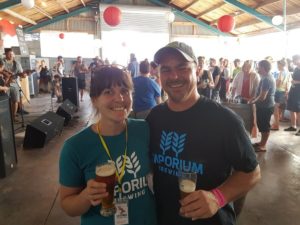 Finney, as Paul prefers to be called, has always described Emporium as a hobby that spiralled out of control, an origin he shares with a great many of our successful craft brewers.  A thirst for the British ale styles from the old country that he couldn’t find here drove him to homebrewing, which led to the creation of the Christchurch Home Brewers Club and Finney’s Homebrew Emporium, the namesake of the future brewery.  Once voted best in the country by SOBA, the home brew shop was a mainstay of the Christchurch scene, and typified Emporium’s connection to the beer community, which is still core to the spirit of the brewery today.

After some years of contract brewing at Christchurch’s Stainless Brewery (now Beer Baroness) the time had come for the real thing.  The brew shop was sold and a site for the new Kaikoura brewery (complete with overgrown minigolf course) was seized upon.

The doors opened on the October 2, 2016, and everything was looking good, apart from the timing, which couldn’t have been worse.  Mere weeks later the earthquake struck, causing massive geological upheaval in the area and, crucially, destroying the highway to Christchurch.

Now finding itself at the terminus of a very long dead end, business in Kaikoura ground to a halt.  The repairs to the highway, despite optimistic official estimates, dragged on for exactly one year, one month and one day before the road was reopened.  Even then it was only drivable in designated time slots and would remain an excruciating slog through stop-go areas for even longer.

With things the way they were, the brewery had to be put on hold and the Finneys were forced to lean on their pre-beer skills and hold down jobs in Christchurch while they waited for the light at the end of the tunnel.

The light (and the tunnel) was at last fully visible by 2019, and with a few upgrades and some crucial know-how from the wandering brew-master Mike Cheer, the brewery was kickstarted back to life and Emporium beers were finally back on tap.  Holding onto that impetus, the plans for the bar were quickly put back into action.

Martin Bennett (aka @ProfDodds on Twitter) of The Laboratory brewery in Lincoln gave some words of advice that anyone familiar with navigating building consent processes will be grimly familiar with: “Three times as long and twice as much”.  That turned out to be excruciatingly accurate, with the building plans for the bar slowly grinding their way through the council process, treading on an expensive car park consent landmine along the way.  But they got there; and the open flag now flies proudly on the side of State Highway 1 to welcome all those in need of a rare North Canterbury craft beer.

The bar’s aesthetic is somewhere between festival taproom and shearing shed, constructed with recycled materials including the wide doors that open the building right up onto the nearby farmland.  It’s a low-key, functional and airy design that embraces the open space around it and gives a sense of breathing room that I greatly appreciate if I’m holding down a spot in a bar for an extended period.

Twelve taps span the core Emporium range, interspersed with seasonals and one-offs (some conspicuously huge Belgian styles were on offer during my visit).  Big five-glass tasting paddles make the variety easier to navigate, and there’s stunningly good by-the-litre prices for rigger fills when you’ve homed in on a favourite.  Food is provided by Slam Club via the satellite kitchen, where their slow cooked BBQ menu is applied to more pub-portable burgers and hot dogs (excellent, by the way).

The minigolf course out back might seem kitsch in a more metro establishment, but as part of such an honest place it fits right in, and along with the two escape rooms provides fodder for families or anyone just looking for a quaint diversion from the beer.  For someone who’s never swung a real golf club except to knock down apples, I have a great fascination with minigolf, so I’m pleased to encounter it in any setting.  My partner (soundly beaten) continues to protest that her performance was affected by the beer.

As the sun set on the day and the last few cancellations blinked on the phone, I felt resigned to my fate, but doubly glad that I was here. With yet another year of uncertainty ahead and all our large events in flames, it’ll be the small places like this that keep us all going, and we in turn them.  So, if you’re in the area, be sure to stop off at this most local of locals.  Play a round and raise a pint to dreaming big while living small for just a little while longer.

Isthmus Brewing's Figaro, a fig and chocolate imperial stout (9% ABV) is intensely dark in colour, crowned by a coffee crema head. The aroma begins with notes of cocoa powder and dark chocolate, gradually changing to include hints of coffee, boozy liquor, and sweet...
Read More

Walk an Auckland Beer Mile in her shoes

More about the author
← When you’ve had all the beers, Pale Ale will rescue you. Hannah Blackwood: Showcasing the art in beer →

Walk an Auckland Beer Mile in her shoes