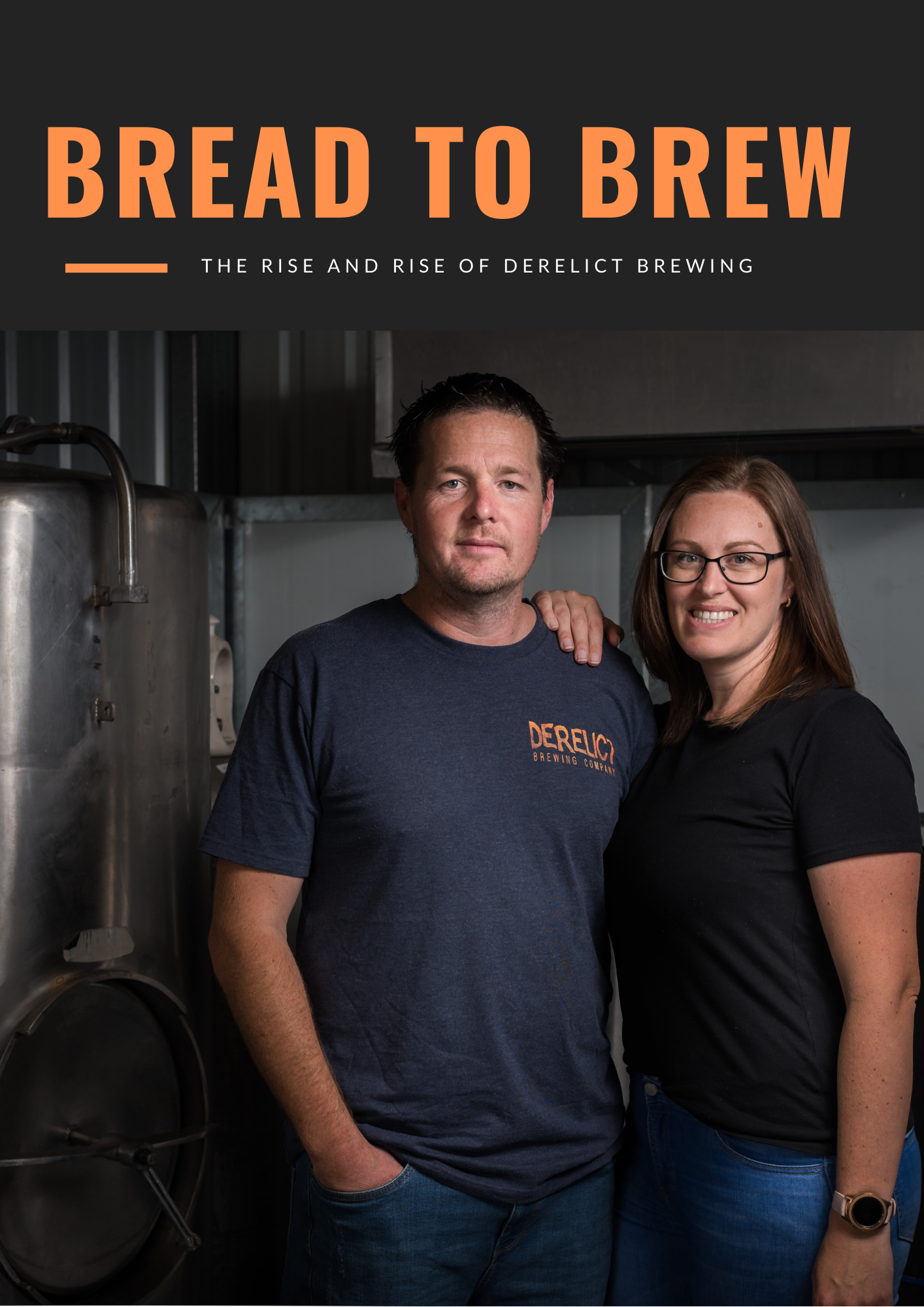 North Canterbury’s Derelict Brewing have recently opened an online store, making their previously hard to find beers more widely available. In this story, first published in late 2020, we talk to Sam Cottier about how Derelict got to No 1 on the Untappd ratings.

If you’re a devout student of Untappd you might know the name of New Zealand’s top-rated brewery.

And no, it’s not Garage Project, Craftwork or Liberty … in fact, it’s a brewery you’ve probably never heard mentioned.

Derelict, a “lifestyle” brewery based in the small North Canterbury town of Fernside, has been top of the Untappd NZ ratings for most of 2020 thanks to a combination of excellent and hard-to-find beers made by Sam Cottier.

Cottier and his wife Natalie bought a 10-acre block west of Rangiora in 2008 when the area was all hobby farms and lifestyle blocks.

“For the price of building in Christchurch, we found we could buy some land out in the wop-wops – well, back then it was the wops,” Cottier says.

Since the devastating 2010 and 2011 earthquakes, many more people have moved north to safer ground.

“The earthquakes definitely changed things – there’s more people out here now and lots of development which is bringing Rangiora closer to us. We are in Fernside, but when people ask us where we are from, we say Rangiora.

The couple owned a bread delivery service but Cottier grew tired of the early mornings and long hours. “I got to the point where I was asking myself `do I want to do this?’. It was too many hours, too many early mornings – it was killing my social life.

“So, I started dabbling in a few things and tried to find what I was passionate about.”

Friends started brewing and that sowed the seed. Cottier played around with his own home brew and soon became obsessed. “When I get into something, I really get into it.”

Joining the Christchurch home brew club brought him into contact with Paul Finney, who ran Emporium, a homebrew store that’s now the name of Finney’s Kaikoura brewery. He also met Oli Drake, the champion homebrewer behind the burgeoning Wilderness Brewing. “Paul was massive influence. He was still learning, we were all learning …”

Things clicked for Cottier when he won a gold medal at the SOBA National Homebrew Competition in 2016, a night he remembers clearly.

“We were heading out that night and I was driving. Nat was checking the results on the phone and she said `pull the car over’.”

She showed him the phone: he’d won a gold medal for his kettle-soured IPA.

“We called it Candyman because when I gave the beer to friends and family they said it tasted like Pascal’s Sour Worms lollies.

“I wasn’t thinking at that stage I should open a brewery but getting that recognition motivated me to keep going and trying to get better.”

He kept picking up medals and awards and did so frequently.

“It almost got to be too much because I was winning quite a bit. I’d enter local competitions and every beer would win a medal.

As part of his prize, a batch of Candyman was brewed at Concept Brewing and sold at Punky Brewster. While it was on tap there in 2017, Cottier won another gold medal for his Coconut and Raspberry Chocolate Stout. It was then talk turned to starting a brewery.

We often get asked ‘why don’t you go all-in and go big?’  The majority of people don’t understand this, but for us, our business is a part of our lifestyle and it all grows together.

“By that stage I was sick of the bread run – I’d been doing it too long and wasn’t using my brain as much as I needed to. When I was driving the truck all I was thinking about was beer and beer recipes.”

Cottier sold his bread run, emptied a shed on his farm and put a brewery in.

The name, Derelict, came from the way Cottier was homebrewing, using repurposed materials such as old kegs and adapting them for purpose.

He admits he would have liked better gear but “that stuff was expensive and I was making good beer with the gear I had”.

The attitude continued when he went professional, using old and dis-used gear. He got fermenters from nearby Brew Moon in Amberley, chilling units from an old pasta factory, an ex-dairy vessel for a mash tun.

“We do have a couple of small, brand new unitanks,” Cottier confesses. “To make really good hoppy beer I think a unitank is essential.”

Bizarrely, the brewery has three kettles, all relatively small at 200 litres compared with the mash tun. It’s a blessing and a curse.

Cottier uses them differently depending on what he’s brewing. He might make a single batch where he takes the runnings from the mash tun and divides between the three kettles, adjusting the gravity readings so they are all the same and then hopping each in an identical fashion to make a single 450-litre finished batch.

Or he can use different hopping regimes on the base wort to get three different beers. Other times he might make a “small beer” in one kettle and a bigger beer in the other two.

“The disadvantages are that there’s lots of cleaning and it’s very labour intensive.

“The advantages are that we can do two or three different beers at a time. Sometimes there’s a bit of maths involved but keeps it my brain active.”

The kettles are one thing Cottier wants to change but “I’m just waiting for right time – and the money.”

Cottier is happy to grow organically rather than borrow to invest.  “I think if I was mortgaged-up I would lose that passion and enjoyment.”

Aside from the obvious quality of the beer, Cottier recognises the small volumes and idiosyncratic nature of his brewing system has probably played a part in Derelict getting to the top of the Untappd ratings.

That said, Cottier was caught out when his brewery jumped ahead of Oamaru star Craftwork into the No. 1 spot.

“It did take us by surprise because I didn’t know there was a rating system for breweries by country.

“In fact, Oli Drake messaged and said ‘well done’ and attached a screenshot showing Derelict at No 1.

While Cottier said it was a “mint” feeling to be rated so highly he didn’t make a big deal of it – and then a global pandemic hit.

“When Covid hit, bars and hospitality all closed. Because we were solely a keg business it just stopped us in our tracks and we were thinking: `so now what?’

“The first thing we did was take a wee break – as we hadn’t had a Christmas break the year before. We gathered our thoughts and decided to start bottling beer.”

Cottier said while he would love to can beer, he can’t afford to do that so he went back to his homebrew roots and started hand-filling bottles with a counter-pressure filler. It’s a task he bluntly describes as “shit”.

It was then he decided it was time to push the boat out – to do something that went against the grain of his rural North Canterbury humility.

“We thought: ‘how can we push these harder – we don’t want to be just another bottle on the shelf’. We figured we had to stop being so damn humble and use that Untappd rating.”

The back of each Derelict bottle has the simple statement: “Currently ranked #1 NZ brewery on Untappd, we focus on providing quality, full flavoured and boundary pushing beers.”

And guess what, marketing geniuses? It worked.

“Once that started getting out, people started talking about it and we started selling more bottles.”

As a result, demand for Derelict beers outstrips Cottier’s ability to supply – and he’s happy with that for now.

“I’ve never really had to sell any beer – we’ve always had bigger demand than supply – and that suits me as I’m not a salesman and don’t have time or inclination to do cold calling.

“I still want to sell the bulk of the beer locally. I like dropping a keg off to bar and having a chat.

“We try to do a bottle release every month, but the beer has to be up to it – the quality has to be good, everything has to be right.”

And he spreads the love as far as he can around the Canterbury region, sending just small numbers of bottles to various outlets.

And for now, he can keep making those not-so-humble labels – as it doesn’t look like Derelict will lose their top ranking in 2020, something Cottier is well aware of.

“I wasn’t worried so much about jinxing ourselves … but I was mindful it could go in different direction. Someone else will go ahead of us on Untappd one day but that just motivates me to work harder.”

Money and rankings are one thing, but the biggest hook for Cottier is the lifestyle.

“How we work won’t suit every brewery model but for our little wee brewery it’s good to have that under-supply, over-demand situation – although it doesn’t help the money side of things … but we’re content with what we’re doing.

“Derelict is a family business and it’s a lifestyle for us. Owning a small business and having it on-site we are reasonably flexible and it allows Nat and I to have a healthy balance between work and personal life, something we never had with our previous businesses.

“It’s great to be in a position where we can be more involved with the kids and their schooling, hobbies or whatever it happens to be – there is usually one of us there.

“We often get asked ‘why don’t you go all-in and go big?’  The majority of people don’t understand this, but for us, our business is a part of our lifestyle and it all grows together.”

Also in the summer issue: