By Brett Atkinson
Hoppiness at home

No other New Zealand city does history and heritage like Dunedin. Former banks and insurance company buildings are stately reminders of Victorian-era prosperity, and the 19th-century warehouses used to store lamb and wool before export also add a northern European gravitas to Otago’s southern capital.

Around 150 years later, the Warehouse Precinct is now enlivened with cafes and street art, but the commercial combination of gold, meat and wool conspired to make Dunedin New Zealand’s most prosperous city. So, in 1876 William Speight and his good mates Charles Greenslade and William Dawson opened the fast-growing colony’s first brewery. Scarfie parties and the random burning of couches would never be the same.

Equally important in the story of Dunedin beer is Emerson’s. Without the pioneering 1990s endeavours of Richard Emerson, New Zealand’s craft scene would be very different. Beers like Emerson’s Pilsner, Bookbinder and 1812 were all gateway brews for Kiwi drinkers and craft brewers. Emerson’s was sold to Lion in 2012, but innovation and the importance of being a Dunedin company both remain evident at their modern HQ which combines brewery, restaurant and taproom.

Two separate brewhouses are used – one for Emerson’s well-established core range, and a smaller, more agile setup harnessed to craft seasonal Brewer’s Reserve releases. From a tasting flight of core beers, the London Porter stands out – poured on nitro, it is a smooth and creamy reintroduction to the brew Emerson first launched with in 1993. The afternoon’s second flight focuses on winter’s Brewer’s Reserve beers – usually only available at Emerson’s in Dunedin – and a balanced array of European styles favoured by brewer Jamie Scrimgeour.

Their Rauch lager is subtly underpinned with smoked malt, and the Tmave Pivo is an authentic stab at a Czech-style dark lager. Belgium gets a look-in with the dry and funky Sustenance Saison, while the Overlord Imperial Stout – deliciously boozy at 8.5 percent ABV – is the dominant big brother of Emerson’s Phantom Lord hopped American stout. Come back in summer and hopped lagers, sours and the occasional kölsch might be Brewer’s Reserve specials. Despite multinational ownership, around 30 different beers are usually available and Emerson’s remains an essential Dunedin destination.

Emerson’s original organic Pilsner was hugely influential in Chris Noyes’ beer education, and he recalls being dazzled while downing one at Albar on Dunedin’s Octagon. With a reaction resembling “what the hell was that?”, the beer’s heady passionfruit and citrus hit of Riwaka hops also started many other New Zealand drinkers on personal craft beer journeys following its launch in 1995. 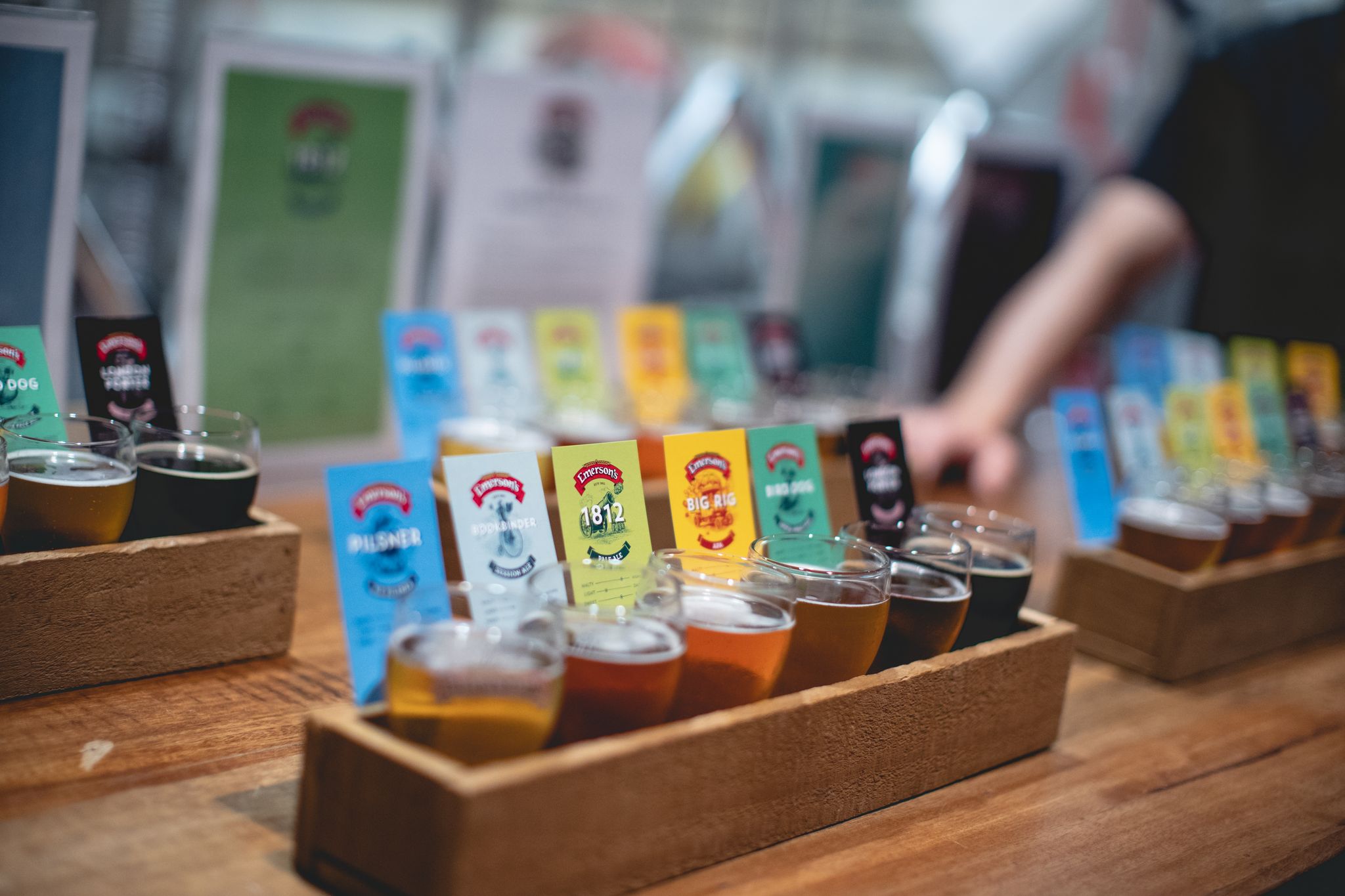 A tasting flight at Emerson’s

In 2020, Chris ‘Noisy’ Noyes now heads up Dunedin’s smallest craft brewery, about 5km southwest of the central city and only open for on-site tastings and takeaway riggers on Thursday, Friday and Saturday afternoons. Despite his epiphany with Emerson’s style-defining Pilsner, he’s a big fan of dark beers and earlier Noisy Brewing releases include a stout made with Dunedin’s Harpoon Cold Brew Coffee. Today’s selection includes Noisy’s Touch the Dragon stout with chocolate, coffee and vanilla, and the Railway Lane porter is infused with local blackberries from Outram on the city’s rural fringe.

Despite the dark beer excellence on display, it’s Noisy’s crowd-pleasing Highness Hazy IPA that’s most popular with regulars popping in for their Friday afternoon tap fills. Inspired by hyper-local breweries in the United States, Noyes’ aim is to build a loyal local following, with tap beers available only from the brewery and from a few select bars in central Dunedin. Still enjoying the juicy Mosaic and Cryo Citra smoothness of the hazy, I make a mental note to check out what’s pouring at Sessions, Dunedin’s best independent craft beer bar.

Keeping it local is also important at Arc Brewing, an easy 22km drive north of the city at Blueskin Bay. Formerly a garage and the Blueskin Bay pub, the roadside location has been transformed into a  rustic, but stylish taproom by the shared talents of ex-builder Jono Walker, and his partner, interior designer Emma Parsons. Food trucks drop by from Friday to Sunday, and they are also keen to host Dunedin bands and musicians.

After home brewing adventures in Sydney, they returned to Otago to open Arc in December 2018. Walker’s keen on crafting mixed culture Brettanomyces-spiked saisons brewed by the likes of Sydney’s Wildflower Brewing and Jester King in the Texas Hill Country, and Arc’s initial taplists were definitely saison-heavy.

A few wild-fermented experiments are maturing nicely in the background, but Arc has now expanded to a more diverse range of tap brews. A rotating series of hazy brews are the biggest sellers, and crafted by Walker they’re usually sessionable at under 5 percent ABV. Brews exclusively available at the taproom include a 4.8 percent hazy with the trans-Tasman hop combo of Galaxy and Nelson Sauvin, while Nelson’s finest are also used for a bone-dry citrus saison. Like Noisy Brewing, Arc also works with local producers. Previous collaboration brews include a creamy chocolate and peanut butter stout made with Bay Road Peanut Butter, and Walker’s hosting a session pairing beers with Ochco Chocolates at Dunedin’s Craft Beer & Food Festival.

Another festival session combines Whitestone cheese from Oamaru and sour beers from Dunedin’s New New New Corporation. Launched in early 2017, the brewery’s always had an eye on innovation and intrigue – including a quirky smoked eel stout and some of New Zealand’s best sour beers – and New New New’s brewery and taproom in a repurposed gold rush-era coach house is a bustling spot on a Friday night.

A more recent innovation comes from the launch of the New Sun hard sparkling range, a low-calorie and low-sugar 6 percent option with summer-friendly flavour combinations, including lemon and clementine, and peach and ginger. Factor in New New New’s planned launch of onsite apartment accommodation, including entertaining spaces, spa pools and the compelling lure of free-flow, self-service beer taps in the kitchens, and the brewery’s profile as industry innovators is set to continue.

During his work for Lonely Planet and other publishers, travel and food writer Brett Atkinson always takes the opportunity to explore a destination's craft beer scene. His favourite beer cities…