As Dave Pearce eloquently laid out in a previous article, more and more breweries are putting their beer into cans (but not everyone’s going that way). Think of what follows as the anecdotal accompaniment to Dave’s dataset as we look at reasons why breweries turn to cans and why some stay in glass.

About 18 months Craig Cooper from Bach Brewing told me he was going totally to cans, and around the same time Epic made their first move to the format that now dominates their production runs. Behemoth, now they have their own canning machine and brewery, have just gone all-cans, with their top-selling Something Hoppy the last of the core range to transitions to cans.

McLeod’s have bought a canning machine, so too Cassels. No doubt others too.

But there are steadfast bottle-only breweries. For some it’s about cost, for others quality. For Tuatara it’s because they have such a distinctive bottle, with the moulded reptilian scales, it’s impossible to think of them putting beer in anything else.

Matt Smith, owner-brewer at Brave in Hastings, is committed to bottles, and not just that, his beer is most commonly found in 500ml bottles, rarely seen on supermarket shelves these days.

“I’ve never had a strong opinion either way – I like cans and agree with the arguments for them: portability, how light they are, especially for shipping. The jury is probably out on whether they are more recyclable than glass,” Smith said.

“The reason for bottles for us is pretty simple: we have a botting line and we can’t afford the cost or the time involved in changing it or adding a canning line.” 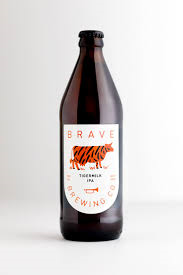 When Smith moved from a 100-litre operation to his current 12hL set up three years ago, he considered a canning line but there were too many pro-glass factors at play. One thing was his location in the wine region of Hawke’s Bay. “We felt Hawke’s Bay, which is where we sell 85 per cent of beer, wasn’t ready for cans,” he explained.

The idea that some beer is meant for cans and others for bottles drives Jason Bathgate’s decision-making at McLeod’s in Waipu.

Bathgate happily puts his flagship 802 series hazy IPA in cans, along with some other unfiltered beers and seasonal IPAs. When he recently upgraded his brewery, he invested in a new bottling line but now has a new canning line too.

He sees the virtue of putting hop-dominant beer in cans, but when it comes to classic styles such as lager, porter and Brett-fermented beers, he’s a glass fan all the way.

“I like putting lager in glass. Germans have been doing it for decades, it’s just what you do it – pouring the classic German pilsner from a can doesn’t feel right.”

He felt the quality argument has “two sides”.

The simplicity and efficiency of a quality bottling line is offset by the small possibility of light damage through amber glass and the fact crown seals are not perfect.

“And handling bottles is so much easier than cans. On the can side, there’s no light getting in, they’re very lightweight, environmentally sustainable from energy point of view – to make them or recycle them. But from a production point of view, they are a pain in the arse.”

The view on the quality of beer in cans versus bottles has advocates on both sides, but social media has been rife lately with pictures of hazies that have turned brown because of a fault in a canning line – such as a low-fill or a problem with seaming. Hazies have way more oxidative precursors than any other style and are super-sensitive to oxygen. And they are largely put into cans so it’s no surprise to see the odd dud in the canned format.

Dale James of Renaissance joined a Facebook discussion on the subject of canning and the inherent problems.

“I work in packaging most days so I have a fair bit to say on this matter. Some breweries, like mine (Renaissance), have been accustomed to bottling for years and have only relatively recently hopped on board with canning. We had more than a few teething problems so it could just be staff getting used to new processes.

“On a technical level and speaking from experience, it is much easier to prevent oxidation when putting beer into a bottle rather than a can.  I’ve come across more than a few dodgy cans, even from breweries I respect and know are usually on top of things but I can’t begrudge them for mistakes. They’re usually willing to accept mistakes and compensate disappointed customers.”

Weezledog beers go exclusively into bottles but Black Sands are in 500ml bottles and 330ml cans. 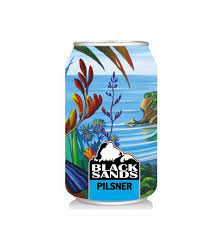 Jackman has a stake in Black Sands, which is majority owned by his friend and colleague Ian Hebblethwaite.

Talking to the pair over a bottle Black Sands Mango and Blueberry Sour, the discussion dances back and forth between quality of bottles versus cans for minimising oxygen – as well as the environmental arguments for and against either.

“I wouldn’t rule out cans in future,” Jackman says, “but I’d hate to put my beer in cans because I don’t think it’s as good as glass, but if that’s what people want then it’s my job to give people the beer they want, in the way they want it.”

Hebblethwaite says the main reason Black Sands put beer in cans as well as bottles is market demand, both from the portability perspective and the fact they tend to be cheaper than bottles for the same sizes.

“We did the cans really because of consumer pressure – people wanted that format and wanted a cheaper pack.

“When I first got into beverages 40 years ago glass was seen as quality and cans were seen as cheap but that’s changed in the past few years and cans are an unstoppable force now.”

On the environmental cost, it’s a coin toss as to which is better and we don’t have the room to explore all of that right now (maybe next time). On actual cost, Hebblethwaite says the market has driven down the price of six-packs for consumers, forcing brewers to lower their margins. But that said it’s cheaper to package a 330ml can than a 330ml bottle.

When it comes to quality, Jackman is adamant bottles still rule. “There’s lots of talk that cans are better – they’re not.”

He points out that despite their contract canner, Crafty Cans, get incredibly low levels of dissolved oxygen during packaging, when he compares a bottle of Black Sands to the same product in a can, there’s noticeable  difference after just month.

Hebblethwaite counters that most people don’t have a brewer’s palate: “The difference not perceptible to people buying them,” he says.

What do you think? Bottles or cans? Drop us a line at editor@hoppiness.co.nz

If you’ve ever scratched your head trying to think of a gift for someone, Dave Pearce hopes he’s got the beer for you. Pearce has just launched Gift Horse Pilsner and Hazy Pale Ale — beers that come with labels that you can personalise for any occasion. Pearce has...
Read More

In keeping with Kiwi tradition — Beervana is going to wait another year until it celebrates a milestone birthday. It’s the 20th edition of the country’s premier beer festival this year — to be held at Sky Stadium in Wellington on August 13-14 — but the organisers are...
Read More

On a vanilla Wednesday afternoon I was at my desk working (aka thinking) about the next beverage I should review and out of the blue my craft beer loving colleague Jamie appeared at my desk and immediately muttered the words: “I hate to say it mate but the haze craze...
Read More

Deep in the heart of the South Island, one hazy at a time, Sebastian Burke is slowly weaning locals off Speight’s.